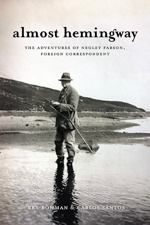 Welcome to the UVA Press Author's Corner! Here, we feature conversations with the authors of our latest releases to provide a glimpse into the writer's mind, their book's main lessons, and what’s next for them. We hope you enjoy these inside stories.

We're beginning the series with a conversation with Rex Bowman and Carlos Santos, coauthors of ALMOST HEMINGWAY: The Adventures of Negley Farson, Foreign Correspondent, out today (August 31).

We’re both fans of fast-paced adventure books and wanted to write one ourselves. And as we are former newspaper reporters it was natural that we gravitated to Negley Farson, one of the most adventurous journalists of all time. Our preliminary research showed that he was an unusual man who barreled through life without apology. His goal was to experience the world and that’s what he did. We admired his grit. The fact that he had been totally forgotten inspired us to resurrect his name.

From Farson’s experience, we learned that it’s easier than you might think to live a non-conventional life, to spurn the 9-to-5 grind and to have an adventure every single day. We hope readers will not only appreciate Farson’s grand exploits but will find inspiration to live more adventurously.

This is a difficult question. One of us loves the story of Farson tying a rope around his waist and pulling a boat 100 miles along a weed-choked canal. That really illustrates that Farson was a human locomotive, unstoppable. The other one thinks the strangest anecdote involves one of Farson’s lovers showing up at his wife’s door complaining about another of Farson’s lovers.

In the spirit of Negley Farson, we’re contemplating a cross-country motorcycle ride, though we’re keeping the itinerary and the book topic under wraps.