Author's Corner with Éric Morales-Franceschini, Author of THE EPIC OF CUBA LIBRE

Author's Corner with Éric Morales-Franceschini, Author of THE EPIC OF CUBA LIBRE 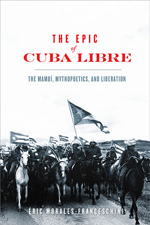 Today, we are happy to bring you our conversation with Éric Morales-Franceschini, author of THE EPIC OF CUBA LIBRE The Mambí*, Mythopoetics, and Liberation*

Initially, the drama of revolutionary Cuba—the seductive story, that is, of a small island nation that stormed the heavens and taunted one empire (Spain) after the next (the U.S.), as if to defy the Furies themselves. It struck me, however, that the aesthetic, mythological, and rhetorical fecundity of Cuba’s “epic” history hadn’t been satisfactorily scrutinized. So much of what’s been written about Cuba is as analytically as it is ideologically predictable. I hoped to offer something different—I dare not say, better.

I trust readers will come away with a greater appreciation for just how indebted Cubans are to their nineteenth century wars for independence and the heroic mambí. But more fundamentally, I hope they’ll learn, as I did, that our (post)modern jadedness about the epic—not the genre per se, but what that genre says about human possibility—is either misplaced or overwrought. No doubt, it’s a precarious affair, always haunted by the tragic. But that alone doesn’t suffice to disavow the validity (maybe even indispensability?) of an epic disposition, least of all as a “revolutionary” or “decolonial” variant.

Just how ubiquitous the mambí is as word and rebellious icon. You’ll find the mambí in textbooks, monuments, school plays, movies, rap music, cartoons, bodegas, the national currency, sports logos, tourist companies, commando units, and even as the name of a breed of cow, bean, assault rifle, and vaccine! As I say in the book, the mambí reigns symbolically in Cuba. I suppose, then, that the biggest surprise was that I managed to make some sense of it all—or at least, I like to believe so...

It’s not in the book inasmuch as of it, but I will say that I went to la Cobre to “visit” with Cuba’s Patron Saint, lovingly known as la Virgin mambisa, so I could ask for her blessings to write this book. The historic mambises visited her shrine, carried her effigy, and sang her hymns throughout the wars. In fact, it’s thanks to mambí veterans that she was officially declared the nation’s Patron Saint. I can’t know whether my prayers were answered, but what better tribute to the book’s theme than to surrender to mystery and faith—which is, after all, what the epic commands of us!

My next book fleshes out five unique theses on the aesthetics of militancy. Titled Tenacious Beauty, it looks to the arts, embodied rhetoric, and collective memory of the 1960s “Third World militant” (from the Cuban barbudos to the Black Panthers and Young Lords) in order to theorize how militancy seduces as much as scandalizes. I put this work in dialogue with the jarring reality of today’s alt-right militias. I think we need new, edifying ways to appreciate militancy’s aesthetic lure and prowess—and, accordingly, its political idiosyncrasies.