Author's Corner with Carra Glatt, author of NARRATIVE AND ITS NONEVENTS

Author's Corner with Carra Glatt, author of NARRATIVE AND ITS NONEVENTS 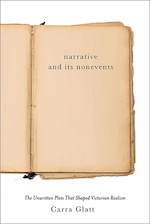 Today, we are happy to bring you our conversation with Carra Glatt, author of Narrative and its Nonevents: The Unwritten Plots That Shaped Victorian Realism

I often tell my students that the best critical arguments emerge from our instinctive responses to texts; criticism is a refinement of, not a replacement for, ordinary, non-academic reading practices. Narrative and its Non-Events arose from one of the most basic questions I think many readers have while reading novels, especially novels designed to generate suspense: why did the author choose this ending or outcome, and not this other one that I might have expected or even hoped for? My book is an attempt to answer that question, at least in the case of many nineteenth-century works.

That what doesn’t happen in a novel can be as important as what does, and as authentic a part of the narrative. The alternative possibilities—what I call unwritten plots—that we may read into a text aren’t, often, the idle speculation of individual readers, but a key part of narrative design. To ignore unwritten plots is to miss out on much of the richness of a text; any novel will contain several others within it. And while I have no philosophical objection to readings that subvert or override an author’s intention, I don’t think that’s the case with the novels I focus on in Narrative and its Non-Events. Victorian authors are anticipating and cultivating certain readerly responses; we are being invited to participate in the process of narrative construction. In fact, the success of the novel relies upon it.

When I began the project, I assumed that Victorian authors would be making narrative choices that affirmed realism, which had become, or was becoming, the era’s dominant genre. Instead, I came to recognize how often they used these unwritten plots to challenge realism and preserve other imaginative possibilities. The “realist” plot did not always wind up being the dominant one, even if what happened in the novel conformed to the demands of realism: unwritten plots, which the text evokes without actualizing, could be more potent than actual ones.

Without giving too much away, Charlotte Bronte was pressured by her father and her publisher to give Villette a happier ending, and she did so in about the most passive-aggressive way possible. When you learn something like that, as a reader, as in the more famous case of Dickens changing the ending of Great Expectations on the advice of the much inferior author Edward Bulwer Lytton, there’s a temptation to stop looking for literary justification, and chalk it up to external pressure. But I think that often, the result shows the extent to which authors are also the first and best readers of their own novels. So even if they’re only making the change under duress, once they reenter a text they had believed to be closed, they locate new possibilities in it and craft an ending that may be different, but which remains an extension of what was “always already” present in their works.

Well, I’m just coming off maternity leave, so continuing to figure out how to be a parent is going to be the top priority on my life agenda for a while! But I’m also working on a new project on the limits of Victorian empathy. Like narratives about the triumph of realism, the idea of expansive empathy has become a critical commonplace, and I’m interested in considering who gets left out in this general expansion of concern for others.