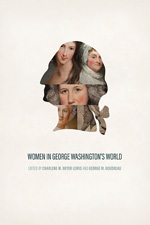 Today, we are happy to bring you our conversation with Charlene M. Boyer Lewis and George W. Boudreau, editors of WOMEN IN GEORGE WASHINGTON'S WORLD

The book began as a conversation during the 2018 Mount Vernon symposium “A sensible woman can never be happy with a fool: the women of George Washington's World.” Several of us discussed how well the papers fit together, and what a great theme it would be for an edited collection. Charlene, a leading scholar of early American women’s history, volunteered to join George, who has spent many years as an editor of historical works. Together, we recruited both authors who participated in the symposium and others who were doing exciting work on women’s biographies.

We learned that the women whose lives interacted and overlapped with George Washington experienced a fascinating world that was being turned upside down. The diverse women our authors wrote of lived through times of great change on all levels. These biographies make that world and those women come to life.

Perhaps the biggest surprise was how much new research is contributing to what we know about early America, and the women who lived then. Readers may think they know everything there is to know about some of our topics, like Martha Washington and Abigail Adams, but new explorations in archives have shown there is much more to learn. Other topics complicate our understanding of famous or infamous events, like Benedict Arnold’s treason or the Washingtons’ reaction to slavery.

Difficult to answer! It’s a volume of biographical essays and full of rich anecdotes. For George, it was reading about women’s lives who he hadn’t known very well, like Ann Bay Goddin’s biography of Ann Pamela Cunningham, the woman who saved Mount Vernon. She was seen as “powerless” by her contemporaries, but she carried out a complex task that led to a nationwide movement, and her historic site continues to be the most visited house museum in America. For Charlene, it was discovering how instrumental Elizabeth Willing Powel was to the creation of the new nation.

Charlene continues work on a book-length biography of Margaret Shippen Arnold, the woman at the center of the most infamous treason case in American history. She’s recently returned from a European research trip where she has met with descendants of Benedict and Peggy Arnold, and has discovered new sources related to their lives. George is completing a book on how we interpret historic sites to tell their complex stories about the past. His research has taken him to roughly half the states and around England. After that, he plans to write a biography of Benjamin Franklin’s last years.