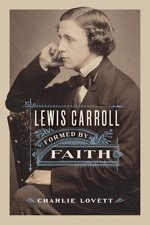 Today, we are happy to bring you our conversation with Charlie Lovett, author of Lewis Carroll: Formed by Faith

As a lifelong Anglican and a lifelong student of Lewis Carroll (Charles L. Dodgson), I had long felt that his faith had been given short shrift by previous biographers. The more I learned about Carroll—through reading his letters, diaries, and lesser-known pamphlets—the more I saw his faith at the heart of everything he did. I became convinced that if you asked Dodgson, "What is the most important aspect of your life?" he would not have responded, "children's books," or "photography," or "mathematics," but simply, "my faith." Believing that, I felt compelled to research the topic more deeply  and write a book that would help others understand this core aspect of his being.

By consulting sources that others had not used, I learned so many new things about Dodgson, especially concerning his education in the faith. His confirmation, for instance, hadn't been alluded to in any previous biography I had read, but I was able to write a whole chapter on the topic. I uncovered people who had been important in the development of his faith such as Scott Surtees and George Edward Lynch Cotton. Ultimately, I hope others will learn two things—that Dodgson's faith undergirded every better-known aspect of his life, and that if you look at a biographical subject from a new angle, you can discover new things about even as well-researched a figure as Dodgson.

I was constantly surprised by the extent to which the evidence showed the connection I hoped to find between Dodgson's religious life and his writings. A book of sermons preached by headmaster Archibald Campbell Tait while Dodgson was at Rugby, for instance, included the questions, "What is life? Is it all a dream?" These two simple sentences became the basis for a theme that would thread through Dodgson's work for decades from the Alice books to his Easter Greeting to Sylvie and Bruno. That the idea of life on earth as a dream from which we wake to life eternal should have been planted in Dodgson as a teenager is typical of the surprises that greeted me while I researched this book.

Not from my book exactly, but from the research process. In trying to track down Archibald Campbell Tait's book of sermons delivered to Rugby boys preparing for confirmation, I ended up at Lambeth Palace Library (Tait had become Archbishop of Canterbury and Lambeth Palace is the archbishop's London residence). There I discovered not only the book which I couldn't find anywhere else, but also all of Tait's manuscript sermons and lectures delivered to Rugby boys during Dodgson's time at the school. These proved an amazingly rich resource and clearly had not been examined in at least a hundred years. What further amazed me about this discovery is that Lambeth Palace is only a fifteen minute walk from County Hall, the building in which the Lewis Carroll Society had been founded in the 1960s. I loved the thought that these manuscripts had been waiting just down the street for a Carrollian to discover them for all those years.

Lewis Carroll: Formed by Faith comes out in the same month as two other books of mine—my novel The Enigma Affair and my middle-grade book The Book of the Seven Spells. I'm currently working on a new bibliography of the works of Lewis Carroll. The most recent bibliography was published over forty years ago and much new material has been discovered since then. My stage adaptation of A Christmas Carol premieres in Winston-Salem, NC in December and next year the same theatre company will premier my adaptation of my novel Escaping Dreamland.