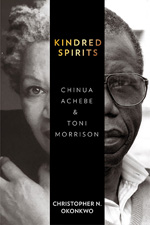 Today, we are happy to bring you our conversation with Christopher N. Okonkwo, Author of KINDRED SPIRITS: Chinua Achebe and Toni Morrison, on-sale this week.

You can say my inspiration grew out of a burning desire to attempt an engaged answer to the two questions that nagged me: one, the persistent “African literature” and “Chinua Achebe” gaps in Toni Morrison scholarship and, two, why there wasn’t a book-length comparative work on both authors. As I stated in the book’s introduction, I wanted to write that book, one that I had for years hoped to read but which wasn’t published. So, in a sense, Kindred Spirits is a book I wrote for myself. Achebe once talked about how the story of Things Fall Apart was lying around everywhere in colonial Africa and that someone else could easily have authored the novel before him. His surprise that no one did write it is one that I share with regard to Kindred Spirits. I used to have a brooding fear, in the many years that I lived with the book from its conception to completion, that I’d wake up one day to discover that someone has beaten me to it. I’ve always thought the Achebe-Morrison connections are quite glaring and should be enticing to comparatists.

For me, it’s more a life and professional lesson in authorship—how, despite technology and our best human efforts, unintended typos, mistakes, or other omissions can still be found in the finished work. For instance, the statement at the bottom of p. 121 should read “The state of Georgia—whose racism and antiblack violence had decades earlier driven Morrison’s father and Georgia-native to Lorain, Ohio....” On p. 157, an answer—namely, that “’Little Africa’ is an historical, slavery-tied, and one of the oldest black settlements in New YorK”—is missing after the questions on “Little Africa” crafted to indicate how barely this enclave is known today. “Michael Crowther” should be “Michael Crowder” on p. 190. These “spots,” and possibly others, escaped attention and will be corrected, in-text, in the book’s second edition, hopefully. But if there’s one thing I’d really like readers to take away from the book, it’s simply that, as Morrison and Achebe show in their works, black people have a long, rich, indisputably human, and interrelated story and that story cannot be erased or unheard.

Nothing really, in terms of the actual writing of the book. This is not my first rodeo, as we say. I’d be remiss, however, if I didn’t take a moment to note again just how wonderful my experience working with UVa press has been. Their staff is first-rate.

I won’t necessarily call them favorite anecdotes. But, from time to time, I’d get a kick out of my imposter syndrome in poetic syntax—my alliterative phrases and drab lyricism (oops, author secret is out!). There’s also my unorthodox integration of (Igbo) proverbs as locations of knowledge and as interpretive medium in literary criticism. Among other things, my research interconnects music and literature, so there are also the nods I give to music and musicians, such as Billy Ocean, Harcourt Whyte, Nelly Uchendu, Jimmy Cliff, Somi, Barry White. In terms of Barry White’s Love Unlimited Orchestra, anyone who hasn’t had the pleasure and fortune of listening to his “Love’s Theme,” the instrumental version, should check it out. It’s been described as celestial, a heavenly and boundary-blurring masterpiece that’s at once symphonic orchestra, jazz, funk, soul, and disco.

I’d like, first and foremost, to enjoy and take pride in this moment of Kindred Spirits’ official entry into the real world and the world of letters, and especially during Black History Month celebration. Then it’s back to work on other long- and short-term research projects, as well as other professional engagements, that I have had to put on long pause, and on pause-and-play, as I focused on completing the book.