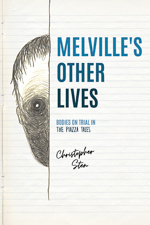 Today, we are happy to bring you our conversation with Christopher Sten, author of Melville’s Other Lives: Bodies on Trial in The Piazza Tales

I have taught the stories in Melville’s The Piazza Tales for decades, but no commentator had ever published a book on this collection before, so I decided it was time to fill the gap with a book of my own. At the same time, like many of the colleagues in my Department, I had been doing a lot of reading in trauma studies, disability studies, pain, invalidism, monster theory, and other theories of embodiment in relation to issues of race, class, and gender, and I began to sense that each of the tales in Melville’s collection might be sharply illuminated by a different theory or set of theories. In the end I imagined Melville’s Other Lives to be a handbook of theories of embodiment in the practice of critical reading.

I hope readers will come to recognize how deeply Melville’s views of the body are embedded in his stories, and in culturally informed thinking about the body during his time (for example, in Emerson and Harriet Martineau) and more recently. That is to say, I hope readers will come to appreciate how much work the body is made to do in the telling of these tales and how sympathetic his views were of certain “others” of his time as defined by race, gender, and class.

What surprised me most was just how prophetic Melville’s treatment of his characters proved to be in anticipating relatively recent theories about the body in matters of pain (Elaine Scarry), trauma (Judith Herman), fragmentation (Deborah Hartman), monsterism (Jeffrey J. Cohen), and performance (Erving Goffman), and how fully he seemed to have understood and commiserated with those who suffered because of poverty, prejudice, or oppression based on gender, race, or class.

My favorite anecdote from the book is a scene from “Benito Cereno,” one of the stories from The Piazza Tales about a slave-ship rebellion and its aftermath. In the course of the tale, readers learn that the Africans have violently overthrown their oppressors, killing or terrorizing many of them in the process. But when an American captain comes on board to offer help for what he takes to be a ship in distress, they pretend to be docile and quietly subordinate to the crew. In the end, after the Africans have been defeated and turned over to authorities in Chile where they are judged by a court of law and punished for their crimes, the American captain meets with Benito Cereno, the Spanish captain of the slave ship, for a friendly chat, only to discover that the latter is a deeply broken, dying man. “What has cast such a shadow over you?” asks the American. “The negro,” replies the Spaniard, thus revealing he has been so traumatized while being held hostage on his own ship and constantly threatened with death by the Africans as to completely alter his attitude toward the slave trade and his racist view of them as docile animals lacking intelligence. Melville’s own view of slavery and his empathic attitude toward the Africans is subtly implied here but meant, I believe, to be so surprising as to shock readers into recognition of their own racial prejudice.

Having retired recently after 50 years at George Washington University, I have been catching up on books I missed earlier in my career and enjoying lots of good times with my friends and family, grandsons, too.