Author's Corner with Daniel B. Thorp, Author of IN THE TRUE BLUE'S WAKE

Author's Corner with Daniel B. Thorp, Author of IN THE TRUE BLUE'S WAKE 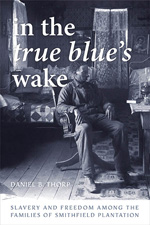 Today, we are happy to bring you our conversation with Daniel B. Thorp, author of IN THE TRUE BLUE'S WAKE: Slavery and Freedom among the Families of Smithfield Plantation, out this week.

While working on an earlier book, Facing Freedom, I had often come across estate inventories naming enslaved people among the possessions of the deceased. The inventory of James Patton Preston, which included 91enslaved men, women, and children, was the largest I’d seen, and the more I looked at the names and dollar values assigned to them, the more I wondered who these people were, where they came from, and what happened to them. In the True Blue’s Wake was my effort to find out.

What I want readers to gain from this book is a clearer understanding of how close members of the families enslaved at Smithfield were and remain. Despite the confines of slavery, husbands and wives stayed together for decades, raised children named after their own parents and siblings, and nurtured in them a sense of family that overcame the destructive effects of slavery. With emancipation, family members who had been separated often reunited, and as later generations moved out of Montgomery County they often moved with or settled near siblings, visited one another or their parents, and continued to name children after parents and siblings. And in the course of my research, I attended family gatherings where these connections remain clear and strong.

How far and how fast descendants of the families enslaved at Smithfield spread across the country but how close to one another they remained. Those who were adults when slavery ended tended to stay in Virginia after gaining their freedom, but their children often left as soon as they came of age. And they didn’t just move to another county in Virginia or north to West Virginia; they quickly migrated to every corner of the United States. By the 1880s, for example, members of the Fraction family had settled in Baltimore, and members of the McNorton family had established themselves in Texas and Montana.

Charles McNorton was a child when slavery ended at Smithfield and grew up living with his parents and siblings in Montgomery County, Virginia. As a young man he attended Shaw University for two years and then settled in Texas, where an older brother was living. There he met a young woman named Sadie Johnson. A relationship soon developed between Charles and Sadie, and in 1895 they decided to marry. Unfortunately, Sadie had second thoughts. According to newspaper reports at the time, while standing at the altar she refused to proceed with the ceremony. According to the newspapers, Charles then shouted “Death or marriage” and shot her.

I’m not sure exactly what it’s going to become, but I’ve started writing about one of the most extensive and protracted freedom suits in Virginia history. In 1826, some two dozen descendants of an enslaved woman named Flora brought suit claiming that Flora had been a free woman kidnapped in Massachusetts and eventually sold into slavery in Virginia. If Flora had been a free woman, all of her descendants should also have been free, so the cases revolved around Flora’s status and history. The suits went on for 29 years, involved testimony from five states, resulted in four hung juries, and two verdicts – both of which reached the Virginia Supreme Court twice before the suits were finally settled in 1855.