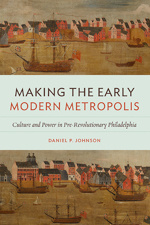 Today, we are happy to bring you our conversation with Daniel Johnson, author of Making the Early Modern Metropolis: Culture and Power in Pre-Revolutionary Philadelphia

We tend to think of early Philadelphia as epitomizing modern liberal values of tolerance and individual freedom. While conducting research for my PhD dissertation, a comparative history of early New York City and Philadelphia, I realized that the story was considerably more complicated. Philadelphia was undoubtedly a unique colonial city, but its development was also shaped by late medieval and early modern urban norms and practices. I also concluded that while my comparative framework remained interesting, the most original material to come out of my research concerned Philadelphia. Of course, this also meant that rather than simply revise a dissertation, I had to write a completely new book!

I came to appreciate the myriad challenges people faced in early modern cities, despite Philadelphia’s relative prosperity. I therefore hope that readers will acquire a greater understanding of the difficulties as well as pleasures that characterized everyday life in the 17th and 18th centuries. More broadly, I hope the book helps convince students and scholars that society and culture can best be understood in relation to one another. Finally, I hope the book encourages readers interested in early America to expand their horizons and read more widely in medieval, early modern, and global history.

Philadelphians’ contradictory attitudes to law. While I knew that the rule of law was an important part of British and British Americans’ identity as a free people, I was not prepared for the pervasiveness of popular suspicion of legal authorities or the frequency with which many people saw law and legal officials as wielding their power unjustly. While free colonists cherished their liberties as Britons and Philadelphians, they also attacked legal authorities in print and occasionally on the street, and unhesitatingly broke laws they deemed unjust or even inconvenient.

There are many, but I think my discovery of an interracial marriage between an enslaved man and a woman named Katherine Williams is my favorite. Following an investigation of the marriage the Philadelphia grand jury petitioned the Pennsylvania assembly complaining of the “indecency” of the act, and requested that interracial marriages—among many other activities involving people of color—be prohibited. They soon were. The case also nicely illustrates the book’s argument about continuity and change by showing the importance of traditional urban forms in new colonial environments, in this case social prominence of the grand jury and the political practice of petitioning, and authorities’ efforts to stamp out subversive practices among oppressed people.

When you’ve spent a long time working on a project, plenty of ideas get shelved for later. So the good thing about finishing the book is that now I have time to pursue other research and writing projects. My problem is that I now have too much on my plate! I’m working on two new book projects as well as two articles in addition to a number of reviews and non-academic essays. I am however determined that my teaching and research commitments will not get in the way of spending more time with my partner and daughter, or stop me from playing banjo and guitar.