Author's Corner with Daniel Wirls, author of THE SENATE: From White Supremacy to Governmental Gridlock

Author's Corner with Daniel Wirls, author of THE SENATE: From White Supremacy to Governmental Gridlock 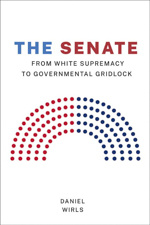 Today, we are happy to bring you our conversation with Daniel Wirls, author of THE SENATE: From White Supremacy to Governmental Gridlock (October).

I have been writing and teaching about the Senate for many years and co-authored a 2004 book titled The Invention of the United States Senate. Other projects intervened, but the intention had always been to follow that first book with a critical assessment of the Senate’s tense relationship with modern democracy. I have for many years been a critic of both equal representation—the fact that each state gets two Senators regardless of population—and the filibuster. I believe both undermine democracy and effective government.

A unique feature of this book is that it treats both features I mentioned—the filibuster and equal representation—together as interrelated problems in the Senate’s past and present. Almost all studies of the Senate treat them separately. But they are related in a few ways, not the least of which is the parallel and deep connection both have with the efforts to maintain white supremacy in the nineteenth and twentieth centuries. But the biases of both—even if less overtly racist—remain front and center in this century. One civic purpose of my book is to get readers to put their partisan interests aside and judge these features of the Senate on their own merits.

There are two contenders. First is the one that opens chapter 7. Minority Leader Mitch McConnell was forced to filibuster his own proposal when the Democrats surprised him by accepting the offer he thought they would refuse. It’s as close as the Senate gets to comedy. The second, which starts chapter 6, came during a 2011 debate on filibuster reform. Unable to draw upon real examples of noble or principled filibusters, Senators repeatedly invoked, instead, Hollywood fiction in the form of “Mr. Smith Goes to Washington” and Jimmy Stewart’s one-man filibuster. This unintentionally exposed the myth of the noble filibuster and the fact that almost all non-fictional filibusters have been associated with resistance to civil rights.

I’ve written about a variety of things, but two lines of inquiry have dominated my scholarship. The first is obviously the Senate (and the constitutional system of which it is a part). The second is U.S. military policy. I’ve tended to alternate between the two, and I have some ideas for another project on the politics of American military policy. One is a critical history of U.S. nuclear policy organized around a study of one very important weapon from the Cold War: the MX missile. This research is unfortunately relevant because this country appears to be starting another Cold War with nuclear weapons front and center.