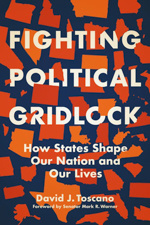 Today, we are happy to bring you our conversation with David J. Toscano, the author of our newly released - and very timely - title FIGHTING POLITICAL GRIDLOCK: How States Shape Our Nation and Our Lives, with a foreword by Senator Mark R. Warner.

Throughout my fourteen years in Virginia’s General Assembly, I became increasingly aware of the power of the states in determining the direction of the country and quality of our lives. Upon my retirement in 2020, I decided I would put some of my thinking into pros and attempt to encourage citizens to pay more attention two state government. Whether it involves redistricting, voting rights, or education, decisions made at the state level dramatically impact our lives and influence policymaking at the federal level.

I am hoping that people who read the book will better understand the importance of engaging with their state elections and officials. I further hope that young people interested in social policy will make a career in state government where they can really make a difference.

I was surprised to learn how different various states are in their policies and even in their constitutions. California has, for example, a process by which they can initiate the recall of their governor. Many western states have a vehicle called “citizen initiative,” by which the public can place items directly on the ballot to enact state statutes or even new provisions of a constitution. Many states directly elect justices to their supreme courts; other like Virginia allow the state legislature to make those appointments. Some state constitutions have provisions to protect the environment, and most all include clear statements about the right to vote.

Most people do not realize that the author, John Grisham, served in the Mississippi House of Representatives for several terms. The book describes his frustrations with his role and how it led him to begin writing A Time to Kill and The Firm. The rest is history.

My next project details the political transformation of the Commonwealth of Virginia from a Ruby red state in 2005 to one that is reliably blue in 2020. The book is called Bellwether because Virginia is often seen as the trendsetter in its election timetable. Virginia holds the first statewide election after the election of a new president, and we have seen trends emerge during those statewide elections that helped predict the future of our country.