Authors' Corner with Douglas Bradburn and Christopher R. Pearl, editors of FROM INDEPENDENCE TO THE U.S. CONSTITUTION

Authors' Corner with Douglas Bradburn and Christopher R. Pearl, editors of FROM INDEPENDENCE TO THE U.S. CONSTITUTION 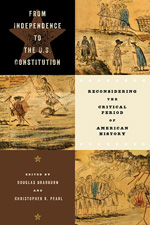 Today, we are happy to bring you our conversation with Douglas Bradburn and Christopher R. Pearl, editors of FROM INDEPENDENCE TO THE U.S. CONSTITUTION: Reconsidering the Critical Period of American History

We brought scholars together to try to reassess the history of a formative time, after the revolutionary war, when the direction of the United States of America was unclear, and “up for grabs.” After the Constitution, more institutional boundaries crystallized, which shaped national and local developments—but in this strange interregnum between 1783 and 1787—the so-called “critical period—with a new nation, without a national government, we hoped to peel away some old assumptions and rediscover the contingency of the past.

We hope that all readers will recognize that revolutionary times often call for incremental solutions to big problems. That the 1780s are interesting in themselves, but we can also be inspired that we are part of a continuity of Americans searching to define the character of our great experiment in democracy.

That there are a great diversity of perspectives that can be brought to bear on every part of American history—that the questions that drive research open up more questions, and that collaborative history is an incredibly rewarding way to tackle the big challenges of the past.

Just how much the topic of this book related to some of the crises we experience today. The problems of the pandemic, while never a part of our experience when these essays were commissioned, made the work more relevant that we could have ever known. The challenges of federal versus national power, of markets suffering from inflation and supply chain issues, and from efforts to define a world order of law in the midst of international war became more relevant over time.

Chris has recently finished a manuscript, which explores the struggle for independence between squatters, speculators, and Native Americans during the Revolution in the Northern Susquehanna River Valley. Doug is continuing to manage Mount Vernon, working to redesign the educational exhibit on George Washington and prepare the historic estate for the 250th anniversary of American independence.