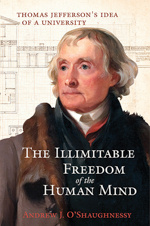 Today, we are happy to bring you our conversation with Dr. Andrew J. O'Shaughnessy, author of THE ILLIMITABLE FREEDOM OF THE HUMAN MIND: Thomas Jefferson’s Idea of a University, out today!

My interest first began after reading Garry Will’s short book, Mr. Jefferson’s University.  Written primarily from secondary sources, it provided a very readable introduction but alerted me to the possibilities for further research.  As the Saunders Director of the Robert H. Smith International Center for Jefferson Studies at Monticello since 2003, I became aware that Jefferson’s obsession with the creation of the university was largely treated in the literature as an epilogue to his career, despite the fact that he regarded it as one of his three greatest achievements. My desire to write on the subject was additionally stimulated by my colleagues at Monticello, who were editing the Papers of Thomas Jefferson (Retirement Series), which included the documents for the founding of the University of Virginia.

I begin my acknowledgments by saying that the book was a pleasure and an education to write.  It involved mastering the history of higher education generally, in order to provide context and to assess the contribution of Jefferson’s University of Virginia. The book makes the strongest case hitherto for the impact and influence of the university upon the development of higher education in the United States. It should have been obvious given the contemporary importance and celebrity of Jefferson. However, most of his innovations have either become so common as to be taken for granted, while some were abandoned by his university.

In my capacity as the research director at Monticello, I am frequently asked what we could possibly learn that is new? The answer is a great deal and this book offers much new information, using sources rarely cited in biographies, such as the memoirs of faculty members, student reminiscences, and the accounts of enslaved people. My description of the laying of the foundation stone, with three presidents present, is the richest and most detailed of anything that has appeared in print. Similarly, historians have previously overlooked his two earlier drafts for the Rockfish Gap Commission, which became the blue print for the University of Virginia. Others have not stressed the importance of his religious views and party political affiliations in his decision to create a new university in the state.

I begin each chapter with an extended anecdote that aims to open up the theme of the chapter and engage the general readers. While some may be familiar, others will be very novel, even to fellow scholars.  My favorite is probably the description by students of dining at Monticello. Jefferson was alive for the first year of the operation of the university, during which he invited groups of students to dinner every Sunday.  They were what his granddaughter called a “feast of reason.”  He was apparently slightly deaf and would push back his chair, in order not to discourage students from talking among one another. With his daughter Martha presiding and sometimes teasing him, he wanted to introduce students to the art of conversation and intellectual exchanges that recreated his own student life at the College of William and Mary.

Writing this book introduced me to a travel journal of Edward Stanley to America in 1824-25.  He later became Prime Minster of Britain, as the 14th Earl of Derby.  A hundred copies of the journal were privately published in the 1920s but it is otherwise unknown in the United States.  It is possibly one of the best such travel accounts of the nineteenth century because of his focus upon education, slavery, race, and Native Americans. It is important because the experience was to shape his political career, especially his role in abolishing slavery in the British Empire.