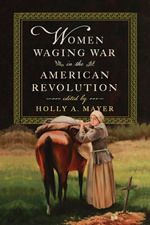 Today, we are happy to bring you our conversation with Holly A. Mayer, editor of WOMEN WAGING WAR IN THE AMERICAN REVOLUTION.

I was invited-or was it lured? Conference director Joe Dooley of the National Society of the Sons of the American Revolution asked if I'd run a colloquium on women during the War for Independence and then edit the essays for a volume on women's challenges and contributions. That was an enticing offer not just to me but also to the conference participants. As both academic and public historians we're all excited about inviting others to explore women's agency in the Revolution

As I reviewed the growing literature about women and the Revolution in combination with these essays, I reflected on how far we've come in understanding how women were integral to the conflict and yet how much must still be uncovered and examined. In effect, picking up on something Anne Firor Scott said in "On Seeing and Not Seeing: A Case of Historical Invisibility" (Journal of American History, June 1984), these authors are detecting and revealing some of what was left unseen. I hope that readers will participate in that enterprise of discovery.

Violence is fundamental to war and yet it has often been flattened, if that's the proper word, in academic evaluations. I've long recognized that violence, but have I and others acknowledged its effects, especially at the personal level, enough? Will readers not just realize but also "feel" just how much violent words and deeds targeted women who then had to combat them? What was not a surprise but remained a challenge was how to connect the universality that appears intrinsic to analysis of women's experiences to the distinctions of individual's lives. In other words, how best to compile woman's histories as well as a women's history. Fortunately, the essay authors advanced that enterprise as they provided stories and analyses that moved between individual and collective issues.

One favorite, for there's more than one, comes from Lorri Glover quoting Eliza Lucas Pinckney. In 1780, as British forces ravaged South Carolina, Pinckney reflected that "Fortitude is as much a female as a masculine virtue." That related to an observation that was not in the book but had been included in the conference's call for papers. In 1776 as the war raged in the North, Mary Silliman wrote that she had "acted the heroine as well as my dear Husband [General Gold Selleck Silliman, Connecticut militia] the hero." Is fortitude heroism? If it is, then the authors proved that we have to account for many more heroes in the Revolution.

As a recent retiree (from teaching, not history), I seem to be on a Hogwarts staircase that keeps moving, so I'm not yet positive about the landing. I'm mulling possible other research and volunteer adventures as I finish writing an essay about some Continental Army veterans and get back to editing a soldier's journal.