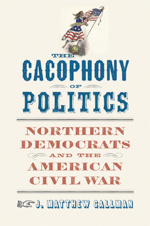 Today, we are happy to bring you our conversation with J. Matthew Gallman, author of THE CACOPHONY OF POLITICS: Northern Democrats and the American Civil War, out this month.

I have written about the Civil War Era for much of my career, but I have never really written about politics. My core goal was to write a political history in a new sort of way, where partisan politics, and electoral politics, and street politics, and household politics were all part of the same story. I wanted to give an appropriately large voice to women. And I wanted to expand our understanding of political actors to include working class people – men and women – who engaged in dissent although we cannot always be sure of their party allegiances.

I also began this project with the idea that the northern Democrats were, as we used to say in graduate school, a “curiously neglected topic.”

I hope that folks will come away with an enlarged sense of what it meant to be a political actor in the Civil War Era.

In addition, I wrestled with how race and slavery shaped political beliefs and actions. I nudge the reader towards some basic conclusions. Some border state Democrats owned slaves and worried about the future of their Peculiar Institution, but most White northerners lived in communities with few Blacks. They had opinions about slavery, but I think they lost little sleep about the lives of slaves. On the other hand, some worked to make White Democrats worry about emancipated Blacks moving into their communities. Still, by 1864 the Democratic Party had pretty much given up on fighting abolition, and their party platform did not mention race or slavery.

I went into this project with some ideas about how popular politics worked. But I had spent little time with electoral politics. This book forced me to think about the 1864 election, when Lincoln defeated McClellan. I was surprised that this was hardly a top-down campaign, with the candidates having a major role in strategy. And I was surprised that ordinary citizens paid little attention to the messages that McClellan and his people were distributing. I became convinced that the results of this hugely important election were contingent on timing and military events. People voted for all sorts of reasons and quite a few shifted their opinions as the war wore on. On election day 45 percent voted against Lincoln. This merits further contemplation.

One of my favorite stories involves Edward Ingersoll. He and his brother Charles were wealthy Philadelphia Democrats who deserved the label “copperhead” for their anti-administration beliefs.

In April 1865 Edward gave an address to New York City’s “Anti-Abolition State Rights Society.” The gathering would have garnered no attention except that Ingersoll spoke the day before Abraham Lincoln was assassinated. Somehow Ingersoll’s rhetoric and John Wilkes Booth’s actions became intertwined in the press.

A mob met Ingersoll at the station when he returned to Philadelphia. He refused to apologize for his words, and – in my favorite moment – he and a Union captain did battle with their canes. When his cane cracked Ingersoll pulled a pistol, at which point the police stepped in.

The story says something about elite arrogance, but also about mob politics.

That is a good question!

I retired as I was finishing the final stages of this book. In the past I have always had that next project underway before the previous one was published. But not now.

I have thought about writing something about how the rest of the nation viewed Florida in the nineteenth century. I really like Thomas Wentworth Higginson’s essay about the St. John’s River and Harriet Beecher Stowe’s essays about postwar life in and around Mandarin.

I am also fascinated by travel books celebrating Florida. It appears that many folks nation-wide saw Florida as a place to go to get healthy, or to kill animals. I might consider writing something about how the rest of America imagined Florida, then and now.