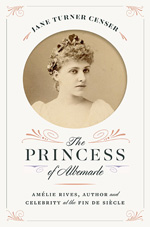 Today, we are happy to bring you our conversation with Jane Turner Censer, author of THE PRINCESS OF ALBEMARLE: Amélie Rives, Author and Celebrity at the Fin de Siècle

Some years ago, while researching a book about social and cultural change among privileged white women in late nineteenth-century Virginia and North Carolina, I first encountered Amélie Rives’s career and writings. Of the aspiring authors in that group, she was among the most successful in publishing in mainstream magazines and books. Her mix of independence and conventionality was intriguing, and her letters and publications fascinating. Although Rives was an exceptional person, her experiences could, in my opinion, reveal much about the possibilities and barriers that women, even beautiful ones from upper class families, encountered in nineteenth-century American society, as they sought expanded roles and opportunities.

Late nineteenth-century American society threw up many impediments against women’s autonomy. While Amélie Rives overcame such obstacles to become a published author, she also made the financially advantageous marriage expected by her family. Deeply unhappy with her husband and suffering from health problems and much unfavorable press coverage, she became hooked on morphine and cocaine. Battling her addiction, she also obtained a divorce, then married for love a portrait painter of Russian noble descent. As she revitalized her career as an author and wrote plays produced on Broadway, she remade her public image to be a cosmopolitan European princess. Rives, despite her great talents, had in her youth made a fiasco of her life, yet she showed great resilience and regained creativity, stability, and happiness.

Delving into newspaper coverage, I was amazed by the huge number of articles about Amélie Rives in the 1880s and 1890s, especially since by her death in 1945, she was no longer well known. This led me to think about how celebrity waxes and wanes. Even though Rives continued to publish actively through the 1920s, she fell out of public notice because she no longer drew attention as a capricious beauty who did and wrote outlandish things. Instead, she had begun to present herself as a cosmopolitan princess who lived a quiet but intellectual existence in bucolic Virginia, producing well-constructed stories and novels. Amélie Rives reminds us of how one life can mix fame, notoriety, and seclusion.

Anecdotes abound about Amélie Rives and her unconventional behavior – especially her posing nude for self-portraits -- a photograph of one such charcoal drawing is included in my book. My own favorite story was told by Rives herself. She met her second husband, Prince Pierre Troubetzkoy, at a party in 1894, when Oscar Wilde insisted on introducing them, because in his opinion, they were the two most beautiful people there. Whether the introduction actually occurred in quite that manner, the historical record is clear that both Rives and Troubetzkoy socially interacted with the flamboyant Wilde at that time. To me this story has a sadder aspect in its suggestion that Rives believed her beauty was her most important attribute.

Even though I now have retired from careers in historical editing and university teaching, I remain engrossed by U.S. history, especially local history and women’s history. Through many years of writing, I’ve discovered that I most enjoy telling stories about people, particularly women, who can illuminate larger themes of their time. At present I don’t foresee another book-length project, but I am considering shorter ones.