Author's Corner with Jochen S. Arndt, Author of DIVIDED BY THE WORD

Author's Corner with Jochen S. Arndt, Author of DIVIDED BY THE WORD 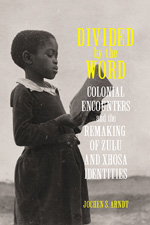 Today, we are happy to bring you our conversation with Jochen S. Arndt, author of DIVIDED BY THE WORD: Colonial Encounters and the Remaking of Zulu and Xhosa Identities, out next week.

When I began my Ph.D. program in history back in 2008, I was determined to pursue a research project related to Lusophone Africa because of my Portuguese language skills. During my second semester, however, I participated in a seminar that covered Britain’s nineteenth-century efforts to incorporate South Africa’s Xhosa chiefdoms into the empire. This seminar inspired me to study the Xhosa language (isiXhosa) and publish a paper about the violent interactions between the British and the Xhosa during a century of “frontier” conflict. These experiences were crucial stepping stones toward my book; they made me realize that there was a bigger story to be told about the non-violent encounters between African and foreign-born actors in the context of language and translation, and how these interactions fundamentally transformed what it means to be Xhosa and Zulu.

I learned that everything that surrounds us is deeply historical, even and perhaps especially the things that appear natural, normal, timeless. In the case of my research for this book, I discovered that ethnic identities that appear to be deeply entrenched, such as Zulu or Xhosa (or German or French, for that matter), changed considerably over the course of history. The anonymous reviewers of my book manuscript put it best when they identified as a key contribution of my work that “it takes a cultural and societal norm largely accepted without question today, pulls on the thread connecting that assumption to the past, and uncovers the ways historical actors manipulated the world around them to create something new.”

I was surprised that it took me ten years to complete the book, but that was largely because my research took me to seventeen archives in four countries. Much of this was due to my extensive use of records produced by missionary societies, which were active in large numbers in South Africa’s coastal belt. These records tend to be partially located in the country from which the missionaries originated, while a second part is usually located in the country in which they worked. To get a complete record of the American Board of Commissioners for Foreign Missions’ operations in South Africa, for instance, I had to work in Harvard University’s Houghton Library in the United States but also the Natal Archives in Pietermaritzburg, South Africa. In the case of the Methodist missionaries, I had to travel to the Cory Library in Grahamstown, South Africa, and the School of Oriental and African Studies in London.

My book is about macro-level transformations—that is, it tracks long-term changes in the meanings of Zuluness and Xhosaness due to the development of the written languages we call Zulu and Xhosa. But it also provides micro-level insights into these changes by showing how Africans were intimately involved in these developments. Unfortunately, the available records rarely provide us with extensive accounts of these Africans. Thus, to bring these individuals into history, I had to go through hundreds of records, slowly piecing together their names, backgrounds, and lives. What complicated my efforts further was that documents frequently used very different spellings for the names of these individuals. For instance, one important African interpreter who worked with nineteenth-century Methodist missionaries was Jantje Nooka whose family name appears in the records as Nookqa, Noeka, Nouka, Nucker, Noega, Nauka, Nquka, Noqwa, Guka, and Noqa.

All I want to reveal at this stage is that my next book will also be about South African history. When not busy with this next project or teaching African history at the Virginia Military Institute, I plan to improve my fly-fishing skills, ideally by practicing somewhere in Africa.

*Caption: Jochen Arndt in the Jagger Reading Room of the University of Cape Town Special Collection Libraries in 2013. (The reading room was destroyed by fire in 2021).*