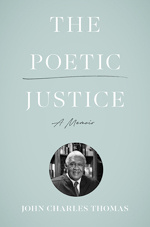 Today, we are happy to bring you our conversation with John Charles Thomas, author The Poetic Justice: A Memoir.

From the time I went on the Supreme Court of Virginia in April 1983, I began to hear from historians that I needed to tell the story of my appointment to the court; they said I had a duty to add my voice to the historical record of this event. But I was busy doing the work of the court and, given that I was only 32 years old, I figured that I had a long time in which to write what had occurred. By 1989 I was leaving the court with a brain tumor, trying to resolve that medical issue, and returning to the practice of law. I did not think that was time to write about my appointment. Then, I got busy as an appellate lawyer, an arbitrator, a mediator, a member of boards and commissions, and as a public speaker. In 2021 I retired from my law firm. I was in my seventies. I was a grandfather. I had time to reflect on the arc of my life and I decided that writing my memoirs made sense. So I did.

It is not so much what I learned from my book as it is what I remembered as I wrote my book. My memory tends to be strong and so it was not hard for me to recall the events of my life: the violence, the tears, the sadness, the fears, the pain, the doubts. In writing my book, I brought these memories back to life and thus had to live through them yet again. This is no fun; it is like post-traumatic stress to have to revisit my childhood and to tell the reader what I have experienced. My life has not been easy. The fact that I survived physically is a minor miracle and the fact that I am not emotionally broken is astounding. I hope the reader will see that with just a little hope, there is a chance we can survive the body blows of poverty, family violence, racism, and the like.

I have been writing for years as a lawyer, as a Supreme Court Justice, and as an arbitrator. All my legal writing was edited by clerks or staff. But the editing process for this book was more extensive. First there was the proposal for the book. Then the review of the proposal and finding scholars who supported the proposal. Next, I started drafting the memoir and received editing suggestions from my acquisition’s editor and others at the UVa Press. Once we were satisfied that I had the substance of a book, I met my copy editor, a fixture in the world of editing that I knew not of. She scoured my draft questioning word usage, punctuation, facts, historical context, and such. She lived in a world of detail and nits and small changes. I was amazed by what she did. I did not think I could ever have the patience to be a copy editor. And after all that, when I thought we were finished I was introduced to a proofreader whose job it was to search for typos and such. And so, for me the most surprising thing about the process of writing this book was the extent and intricacies of that process.

The anecdote that is strong in my memory is not the kind of thing that would usually be called a ‘favorite.” That word is too positive a word for my reaction to what I write about the day the Norfolk public schools took brought students from all white elementary schools and all black elementary schools to a formerly all-white movie theatre in downtown Norfolk to watch together a movie about Macbeth. All the black children were seated together front and center near the screen. As soon as the lights went out, the white students threw their drinks, their ice cream, their sodas, their popcorn front and center at the black children. We were bombarded. Our teachers evacuated us from the theatre through the exit doors on either side of the screen.

The book has generated speaking engagements and requests for lectures as law schools and such. I think that in the future I will spend a fair amount of time talking about the book and about my perspective on life liberty and the pursuit of happiness. I think that I shall be busy.