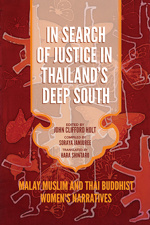 Today, we are happy to bring you our conversation with John Clifford Holt, editor of IN SEARCH OF JUSTICE IN THAILAND’S DEEP SOUTH: Malay Muslim and Thai Buddhist Women’s Narratives

While interviewing people in the Deep South of Thailand, I was inspired by the dedication of NGOs and CSOs working to mitigate violence and its aftermath. From Soraya Jamjuree, I learned of her efforts to give voice to those women whose lives have been devastated by the loss of husbands, fathers, sons or brothers. I wanted to do something to amplify their voices, since the nature of this conflict between Buddhists and Muslims is not well known outside of Thailand..

I learned much about the courage of the vulnerable in times of emotional chaos; more specifically, how their religious dispositions were a source of strength as they faced enormous odds at recovery.

How bitterness and hatred can be transcended ultimately when adversity is parlayed into triumph.

My favorite anecdotes are found in the lives of Sheik Daud al-Fatani (late 18th-mid19th c.) and Hajji Sulong (mid 20th c.), whose refashioned Islamic theologies and religio-political aspirations respectively continue to serve as paradigmatic sources of faith for those who continue the struggle for justice today.

I do have another book in the making consisting of extended conversations over several years with key Muslim interlocuters in the Deep South region who are concerned with education, mental health, torture, environmentalism, violence, and history. As for the future of the Thai Buddhists and Malay Muslims in the Deep South, we cannot expect definitive changes in their basic security and economic conditions until a new (non-military) government is democratically elected to enact progressive and inclusive policies that result in measures of devolution of power.