Author's Corner with Jonathan Singerton, author of THE AMERICAN REVOLUTION AND THE HABSBURG MONARCHY

Author's Corner with Jonathan Singerton, author of THE AMERICAN REVOLUTION AND THE HABSBURG MONARCHY 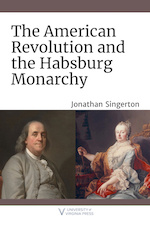 Today, we are happy to bring you our conversation with Jonathan Singerton, author of THE AMERICAN REVOLUTION AND THE HABSBURG MONARCHY

We should always seek to find something new in the past, especially about events that often seem already well known to us. My book approaches a familiar event, the American Revolution, from an entirely different angle; one that we might not imagine, and few have ventured to examine in any real depth. As I lived in Vienna years ago, I simply wondered what the American Revolution meant for people from this part of the world. My quest to find out led to this book and allowed me to rediscover many forgotten stories, individuals, and moments crucial to understanding the wider context of the United States’ revolutionary founding.

I sincerely hope for two things: 1. Readers will be inspired to think differently about the past and, those engaged in academia, will seek out new regions for study. 2. Readers will appreciate the importance of language learning. Acquiring a new language (or brushing up on one) is absolutely necessary to work beyond your comfort zone and to expand any field of study—even in the seemingly Anglophone world we inhabit today.

Finally, what did I learn? I learned to ditch clichéd perceptions of historical figures and to always expect the unexpected in history, especially when it involves either Thomas Jefferson or Maria Theresa.

Whether it was the sheer abundance of sources, the startling connections, the miraculous quotation, or the fabled archival goldmine is hard to say. There were many surprises during the researching and writing stages.

A notable research moment sticks out in my mind when I travelled to Košice in eastern Slovakia where I trapsed around all the city’s archives in search of the works of Johann Zinner, a contemporary of the American Revolution who wrote exhaustive histories about the events in North America. On the second-to-last day I finally had my eureka and located several of his handwritten books about the American Revolution in a private library. These works were thought to be lost, but they survive! And contained so many insights that it was one of the biggest joys (and surprises) to write about for readers.

The book begins with a favourite: the baptism of a young boy in St. Stephen’s Cathedral in Vienna who was named after three American revolutionaries.

But it’s a close call. Describing the moment when the Habsburg representative in the United States met with members of the Oneida Nation to scout out potential trade deals is a fascinating encounter.

Runners-up include the British ambassador in Vienna leading his delegation to publicly pray for British victory when all seemed lost; American pirates stealing a ship and abandoning it in the main harbour of the Austrian Netherlands (but not without taking the liquor first); the scores of imperial courtiers who planned to emigrate to the United States after the war, and an Austrian monk who composed a play about the effects of the American Revolution.

I’ve almost finished my second monograph about an Austrian countess who fled to the United States in the 1790s and lived out on the frontier before becoming an entrepreneur in Philadelphia and later returning to post-Napoleonic Vienna. It’s been a labour of love for years so I’m glad to see it come to fruition.

Thanks to some funding, I embarked on a new research project in February 2022 on another unknown aspect of American history: the Leopoldine Society, a nineteenth-century Austro-Hungarian foundation which supported Catholicism predominantly in the American Midwest.

Apart from that, I continue to enjoy teaching students at Innsbruck about the global past of the Habsburg lands. Next semester, I will give a lecture series on Austria’s oceanic connections within world history.