Author's Corner with Jonathan W. White and Lydia J. Davis, Editors of MY WORK AMONG THE FREEDMEN

Author's Corner with Jonathan W. White and Lydia J. Davis, Editors of MY WORK AMONG THE FREEDMEN 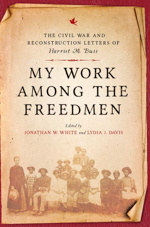 Today, we are happy to bring you our conversation with Jonathan W. White and Lydia J. Davis, Editors of MY WORK AMONG THE FREEDMEN: The Civil War and Reconstruction Letters of Harriet M. Buss, out this month.

JW: I first came across the Harriet Buss letters at the University of Pennsylvania’s Kislak Center when I was doing research for Midnight in America: Darkness, Sleep, and Dreams during the Civil War (2017). I skimmed the collection and saw that it contained wonderful material not only on the Civil War, but also Reconstruction. I sat on the letters until 2019 when I asked Lydia if she’d like to help me transcribe and annotate the collection. She was thrilled to do it, so we went to work. We are excited to make this material widely available and are confident that readers interested in the Civil War Era will find great value in them.

JW: Prior to working on Harriet’s letters I didn’t know too much about the education of freedpeople during and after the Civil War. Most of what I knew was focused on the Port Royal Experiment. Reading Harriet’s correspondence gave me a much better understanding of what teachers and students were doing in the South. The fact that she taught in three very different places over the course of a ten-year period gives a sense of the diverse experiences that students and teachers had during and after the war.

JW: In reading the letters, I was struck by the affection Harriet developed for her students. Teachers for freedpeople are sometimes criticized in the scholarly literature, but Harriet’s heart for her students really comes through—especially in the later letters. You see how she came to understand herself as being on a mission with her students, not to them. I love how she describes one particular student named Thomas Noel. She clearly loved him and wanted to do everything she could to help him. It took us months to identify Noel, but once we figured out who he was (so that we could write a footnote) we felt like we were getting to know him a little bit, too. She also taught Robert Smalls and his family, which is simply amazing!

LD: I was particularly amused by Harriet’s love for food throughout her letters. She frequently writes about how much she loves to eat, what she would like to eat, and even about her weight gain. She writes, “I don’t live without having something to eat.” While providing a few laughs throughout the transcription process, the details Harriet provides offer tremendous insight into Southern foodways during the postwar period.

LD: in June of 2021 I transitioned out of my role as a University Fellow for Admission at Christopher Newport University. In July I joined the Education staff at The Mariners’ Museum in Newport News, Virginia, where I will develop and facilitate history-based programs for K-12 students.

JW: In February 2022 I’ll be publishing a book entitled A House Built By Slaves: African American Visitors to the Lincoln White House. After that, I plan to write a short, fast-paced narrative about a Black refugee who murdered his former enslaver in an attempt to rescue his two teenage daughters from bondage.