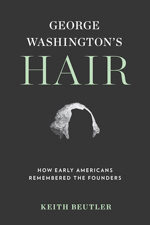 Today, we are happy to bring you our conversation with Keith Beutler, Author of GEORGE WASHINGTON'S HAIR: How Early Americans Remembered the Founders, out this month.

Much as I love prior work by other historians on patriotic memory in the early republic, I was never able to find answers to two questions that haunted me as an American cultural historian: did early Americans believe different things about memory itself than we typically do today? If so, did their different-than-our-own definitions of “memory” influence the contours and politics of early Americans’ patriotic recollections and identity?

As I sought for answers to those two intertwined questions in early American sources, my wife and I were raising our (delightful!) children, in the long shadow of terse post-9/11 “Never Forget!” popular culture, which only served to amplify and to make more tender my concerns as a historian about how cultures, including our own, contest and construct memories of “their” pasts.

I learned to see performances of patriotic memory in early America more clearly through the eyes of the people at the time and less through the lenses of our cultural peepers today. That’s helped me to understand with greater empathy—and, I hope, more insightfully—both their age and ours. I can’t wait to hear from readers of George Washington’s Hair about whether—and, if so: how, why, and to what extent—my book’s arguments and (at first blush, often madcap) evidence inspire them to revise their own understandings of America’s past and its present.

Truly, I was amazed, and grateful for, the understanding and patience of editors at UVAP, especially Richard Holway and Nadine Zimmerli. A lot of life happened for me and my extended family while I was writing George Washington’s Hair and the press couldn’t have been more understanding. The same was true in my relationships with colleagues throughout the profession. I hope that my experience of being allowed to focus on family and other urgent obligations as needed is evidence that historians today are determined—not just in theory, but in practice—to be understanding, inclusive and welcoming toward each other as each of us deals with the slings, arrows, and responsibilities of life.

It’s an entire person, Hamet Achmet! Achmet was an African-born Revolutionary War veteran and cultural polymath, who, in the 1820s and ‘30s literally took popular patriotic American memory by the hair—brandishing an extant lock of George Washington’s hair and making much of his own unapologetically African-styled hair to effectively co-opt and critique patriotic memory culture in Middletown, Connecticut, where he was living at the time. Hamet Achmet was a sort of early American Forrest Gump, with an uncanny knack for showing up wherever cultural history was being made.

Two parcels from Achmet’s hirsute Washington stash—one held at the Middletown Historical Society in Middletown, Connecticut, and the other at DePauw University in Indiana—are my favorites among many putative locks of George Washington’s hair that are represented today in the collections of more than 100 American museums, university archives, historical societies, and libraries. Even after years of chasing Hamet Achmet across time and space, I am nothing short of awed by the true story at the epicenter of George Washington’s Hair of how that Black veteran of the Revolution deployed his clippings shorn, he insisted, from America’s first commander-in-chief in a savvy campaign to make memorable his own poignant personal identity as a Black American Patriot.

I should be finished writing Thomas Jefferson’s Toenails, by late in the second week of November in 2041. – No, but on a more serious note, I’m now working on a book about how ordinary Americans interacted directly with the Founders, particularly in the latter’s retirement years. (I can’t imagine that “Toenails” will be any part of its title!)