Author's Corner with Kenneth S. Abraham and G. Edward White, Authors of Tort Law and the Construction of Change

Author's Corner with Kenneth S. Abraham and G. Edward White, Authors of Tort Law and the Construction of Change 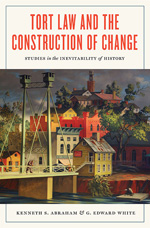 Today, we are happy to bring you our conversation with Kenneth S. Abraham and G. Edward White, coauthors of TORT LAW AND THE CONSTRUCTION OF CHANGE: Studies in the Inevitability of History, out this week.

Between 2013 and 2021 we published several articles on tort law in law journals, each of which had a historical component. We were encouraged by colleagues in the legal academy to collect the articles in a book. In reviewing the articles with that in mind we concluded that they collectively represented the application of a general thesis about how American tort law has changed over time and the relationship of history to that process.

We learned, in thinking of the articles as making a broader point about the relationship of tort law to its historical context, that “history” has operated on the process of doctrinal change in tort law in two potentially contradictory but ultimately complementary ways. History as the accumulation of established doctrinal rules and propositions has functioned to constrain the degree to which changes in tort law can depart from the past. Such changes need to be reconciled with accumulated doctrine in a fashion that does not undermine the recurrent need for stability and predictability in the legal rules which govern human conduct. And history as the changing social context in which legal decisions are made regularly puts pressure on existing doctrinal frameworks to accommodate altered social conditions and cultural attitudes. The interaction of those two dimensions of history in the course of tort law’s development is what we are calling the “inevitability” of history.

Neither of us had previously attempted the task of converting published scholarly articles into book chapters designed to be read by multiple audiences. We found the task harder and more time-consuming than we anticipated. The experience gave us an enhanced sense of the assumptions one needs to make in writing for different audiences.

We are longtime colleagues and good friends who for many years had taught Torts to first-year law students but had not done any collaborative writing until, by chance, we were asked to participate in a symposium honoring our late colleague Jeffrey O’Connell. In considering what to submit for that symposium, we discovered that we both had a longtime fascination with the career of William L. Prosser, the most prominent Torts scholar of his generation, which immediately preceded ours. We also found that in writing about Prosser we could draw energy from the ideas of one another. Thus began an interval—not yet completed—in which we resolved to write at least one collaborative article on Torts each year. The result has been an unexpected pleasure for both of us.

We plan to continue teaching Torts (and other subjects) and pursuing our own scholarship, setting some time aside for more collaborative articles on tort issues with historical dimensions. The challenge will be to identify and analyze such issues.