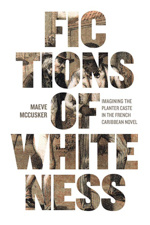 Today, we are happy to bring you our conversation with Maeve McCusker, author of FICTIONS OF WHITENESS: Imagining the Planter Caste in the French Caribbean Novel, out later this month.

I’ve worked for many years on ‘black’ Caribbean writers, and more recently on literature by ‘white’ planters, and was conscious that the slave master/mistress had been neglected in French Caribbean scholarship. The basic premise of the book was to examine how white elites imagined themselves in fiction, but also how whiteness was constructed by writers descended from enslaved peoples (in reality of course most Antilleans are descended from master and enslaved). I was particularly interested in the acute contradictions experienced by citizens of the départements d’outre-mer, who inhabit a ‘pigmentocracy’—a society stratified around skin color, where a plethora of terms name minute gradations of shade—and where ‘race’ is intimately intertwined with status. Yet Guadeloupeans and Martinicans are at the same time citizens of the notoriously ‘color blind’ French republic, where race is not recognized as an identitarian category.

What struck me most forcibly was the convergence in representations of the master/mistress, across time and across radically different contexts of production. Shared tropes, figures and themes (ambivalence and anxiety; melancholia; nostalgia) characterize writing by both ‘white’ and ‘black’ writers, and the fiction of the latter is often remarkably empathetic towards the planter. I’d like the book to inspire readers to read beyond what Kaiama Glover calls the ‘disturbingly fixed roster of writer-intellectuals’ who dominate the literary field today. ‘Big names’ (Glissant, Chamoiseau, Condé, Confiant) are given significant space here, of course, but I look beyond them too; neglected writers such as Vincent Placoly, and more populist novelists such as Henri Micaux and Marie-Reine de Jaham, have much to tell us about Caribbean society, while early precursors (Traversay; Maynard; Levilloux) provide a fuller genealogy of the literary tradition.

The tectonic global force of Black Lives Matter, which was spectacularly reanimated by the murder of George Floyd just as I was finishing the manuscript, and which brought terms such as ‘white privilege’ and ‘white supremacy’ into the mainstream. The movement made a material imprint in Martinique. The statue of Joséphine de Beauharnais, Napoléon’s first wife and daughter of Martinican planters, had stood (albeit, since 1991, decapitated) in the centre of Fort-de-France since 1859. The statue was toppled and smashed to smithereens in July 2020. My original Introduction read the maimed but upright statue as symbolising the dominance, and simultaneous persecution complex, of the white planter. My reworked Introduction analyses the statue’s destruction, but cautions against reading Joséphine’s disappearance as heralding any seismic shift in the correlation between whiteness and privilege on the islands.

The recent decimation of Joséphine’s statue, before a jubilant crowd on a busy Sunday morning and live-streamed on social media, contrasts with her decapitation, carried out at night and never claimed by any group or individual. In a largely unremarked news bulletin, one of the assailants, back to camera and voice disguised (clearly in 2018 this remained a culturally sensitive act!) speaks for the first time. The interview is studded with tantalising anecdotes: the head was easily dislodged but surprisingly heavy; the only time-consuming part of the operation was deciding what to do with the head. But my favorite detail is that the attackers were coming from the wake of famous musician Eugène Mona; wakes are hugely significant in Caribbean culture, and this detail grounds the event as much in orality, community, and (potentially rum-fuelled) spontaneity, as it does in political conviction and activism.

I’m currently preparing classes for next semester, which I’m hoping will be in person (I’ve really missed the magic of the classroom) and am starting a project looking at links between Ireland and the French Caribbean.