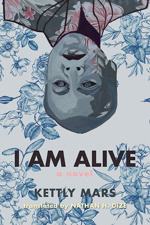 Today, we are happy to bring you our conversation with Nathan H. Dize, translator of I AM ALIVE

What inspired you to translate this book?

Not everything in my life can be said to be poetic, but what inspired me to translate I Am Alive is. The book is about a series of returns – children returning home from elsewhere, returning to a moment in the past for further reflection, and so on. So, I happened to buy and read the book for the first time as I was preparing to move back home to the United States after a year living in France.

I don’t remember exactly where I was while reading it, but I was struck by the tale of Alexandre’s return home after spending more than four decades in a mental institution. I thought it was such a poignant story of a Haitian family living in the aftermath of the 2010 earthquake – not only had an earthquake occurred outside their home, but there was another, more intimate seismic event, taking place inside their family hearth.

What did you learn and what are you hoping readers will learn from I Am Alive*?*

In the process of translating the novel, I learned so many lessons about perspective. I Am Alive is a choral novel – where each character narrates sections in the first person – with more than a dozen characters. This makes the book a challenging one to translate, but it can also be taxing on the reader. I hope that readers spend some time with the novel, getting to know each character on their own terms, because each of them has something to teach us about who we are as human beings. There are the family members who live in the family compound at Fleur-de-Chêne, and there are also people who work there. Each character has their own version of the events that sent Alexandre away. They also have their own individual ways of seeing the world. Being from the United States, the media often tells us to see Haitians and Haiti in only one regard, I Am Alive shows us another way. I hope that readers come away eager to learn more about Haiti and the lives of Haitians.

What surprised you the most in the process of translating I Am Alive*?*

I’m always stunned by how cinematic Kettly Mars’s writing is. She has this uncanny ability to place the reader in the same room as her characters so that we may share in the intimacy or the violence of a scene. This is apparent at the beginning of the novel when the earthquake happens. In these scenes we witness the action through the eyes of Alexandre before he receives an additional dose of medication to calm his schizophrenia. As he surveys the courtyard of the mental hospital, he explains what he sees in his own language, which softens the violence of the quake, but allows the reader to enter his mind and the world of his mental illness.

What’s your favorite anecdote from I Am Alive*?*

There are so many moments that I love in I Am Alive. It’s hard to pin down one specific moment, but I like it when the characters unwittingly correct or contradict one another. I come from a large, blended family. So, I smile when I come across these moments because it makes me think about my own family and how we often have our own subjective version of events or perceptions of something that has happened to us all.

Up next, I have a translation of a novel by Lyonel Trouillot called Antoine of Gommiers that that I am very excited about. If I Am Alive is the book that makes me think of my whole family, this next translation is the one that makes me think about my brothers specifically. Antoine of Gommiers is a story of enduring fraternal love, the magic of storytelling, and the absurdity of life in urban Haiti.