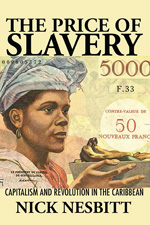 Today, we are happy to bring you our conversation with Nick Nesbitt, author of THE PRICE OF SLAVERY: Capitalism and Revolution in the Caribbean, out this week.

I was inspired by what struck me as a lack of theoretical clarity on the nature of capitalist slavery since the Haitian Revolution in the literature since Eric Williams’ classic 1944 study Capitalism and Slavery. One way to understand the book is thus as an intervention in current debates on racial capitalism and the so-called New History of Capitalism. Focusing on capitalist slavery in the Caribbean, the book argues that only by returning to Marx’s analysis of capitalism is it possible to grasp the nature of capitalist slavery as a social phenomenon—returning to Marx as did each of the Caribbean intellectual activists I discuss: CLR James, Aimé and Suzanne Césaire, Jacques Stephen Alexis. The book refuses to view modern, capitalist slavery as merely one among many (more or less exploitative) technical modes of producing ever more monetary wealth. Instead, it seeks to bring into question the historically contingent form of social relations we live in. I argue that the development and deployment of racial ideologies and capitalist production processes (including slavery) necessarily occurs within a governing framework of social relations, which Marx called the capitalist social form. Amid the current proliferation of fake news, the post-Trump racist malaise and democratic dysfunction, and the abysmal predominance of social media as worldview producer, to undertake such a close, postcolonial reading of Marx’s Capital has the further benefit of giving the reader (and here I include myself) an understanding of what it means irrefutably to prove a claim (in this case, the essential nature of capitalist slavery). Marx did not simply voice “viewpoints,” and “perspectives.” In Capital, he carefully shows the reader, step by step, point by point, what must be the essential characteristics of any society that is characterized by the general predominance of commodities and commodified social relations (including capitalist slavery).

I’ve come away with a deepened understanding and appreciation of the nature of capitalism and the fundamental place of slavery within it; of the fundamental importance of Marx’s analysis of capitalism for the great black militant thinkers of the Caribbean; of the extraordinary and contemporary genius of Marx’s unfinished masterpiece, Capital, along with, as W.E.B. Dubois repeatedly tells us, its absolutely crucial importance for grasping the true nature of racial capitalism and slavery. Only with such critical reflection, I would argue, can we hope adequately to grasp the essential place of racial discourse and violence within the capitalist social form.

What surprised me most is the passionate generosity of so many colleagues who helped me to think, and to think better, about the nature of capitalist slavery and the overall importance of Marx’s thought for Caribbean critique. It really would not have been possible without these many exchanges, which pushed me to focus intensively on a single problem, from many angles, over the course of an entire book: if slave labor does not create surplus value (as Marx defines it), what is the nature of its contribution to capitalism?

Next, I am working on a book on the (often unspoken or implicit) ways Louis Althusser’s students—Pierre Macherey, Alain Badiou, and Etienne Balibar—have continued “reading Capital” in the decades since the publication of the famous book by that name.