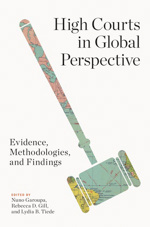 Today, we are happy to bring you our conversation with Nuno Garoupa, Rebecca D. Gill, and Lydia B. Tiede, editors of HIGH COURTS IN GLOBAL PERSPECTIVE: Evidence, Methodologies, and Findings.

The three of us believed that there has been significant scholarly progress in empirical judicial politics outside of the United States. However, we perceived that progress has been widely dispersed across subdisciplines and outlets, hence lacking the overall impact it actually deserves.  Further, the study of comparative judicial behavior seems to be fragmented among countries or regions.  We sought with our book to provide an overview of the extant scholarly work and a framework for more comparative work across countries and regions.  The chapters in the book were inspired by an ambitious conference (funded by the National Science foundation) that we organized to gather scholars from different social sciences with different country or regional specialties to discuss the larger enterprise of comparative and empirical work on high court behavior. The book is the product of discussions and papers that originated from this initial conference.  The goal of the book is to present the state of the art work and current methodological challenges.

The empirical study of higher courts around the world is a collective effort by many scholars. It has produced important and insightful knowledge. Data and methodological challenges are common to many regions of the world. Yet there are also specificities that provide excellent learning opportunities.

We did not write the book, rather edited the book. We are extremely grateful to all scholars who participated in the book. The interaction between senior and junior scholars, as reflected in the volume, was particularly enriching to us as editors.

Although specific anecdotes were presented by various authors, overall, we were impressed by the wide range of scholars who advocated for collaboration with legal professionals in the countries studied to gain specific knowledge about how courts operate in practice, which includes an understanding of informal rules and practices.  Additionally, comparative judicial scholars who authored these chapters were excited about the availability of high court data across the world and new methods for examining it.

We are considering future meetings by scholars in varying social sciences with an interest in comparative judicial behavior. There are so many recent developments in methodology, data availability and case analysis that, fortunately, any state of the art overview such as ours is only the beginning and will require frequent updates and further scholarly collaboration. The present book is not the endpoint but yet another step in the direction of more knowledge, a  better understanding of judicial behavior and cross country comparisons.