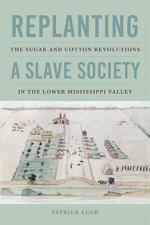 Today, we are happy to bring you our conversation with Patrick Luck, author of Replanting a Slave Society: The Sugar and Cotton Revolutions in the Lower Mississippi Valley

As is often the case with historians, a discovery in the archives. While researching, I came across the letters of a Louisiana indigo planter named Julien Poydras. Poydras’ letters detailed his efforts to overcome economic challenges by switching his cash crop from indigo to cotton. His letters also revealed that other planters were switching to sugar at the same time.

This struck me as important considering that the main cash crop grown in a slave society is typically seen as crucial to a slave society’s structure, and the cotton revolution is a crucial turning point in the history of slavery in the United States. My book is an effort to understand why and how these crop switches happened and some of the effects they had.

The single most profound thing I learned was how deliberately elites remade the lower Mississippi Valley’s slave society in the late 1800s. They faced severe political and economic crises, in part because of the French and Haitian Revolutions, and looked for and found solutions to those crises in sugar, cotton, and slavery.

I also learned that regional elites recognized their “achievement” of rescuing slavery and were proud of it. This comes through most clearly in their response to the 1811 German Coast Insurrection when many openly gloated about how they had defeated the people they enslaved. I think most of them would have been extremely self-satisfied if they could have seen the state of the region in 1860.

How long it took?

More seriously, how aware people were in the lower Mississippi valley of how much the future of the region was up in the air in the 1790s considering the revolutionary forces entering the region (most obviously symbolized by the 1795 Pointe Coupée Slave Conspiracy), the threatening expansion of the Anglo-American republic, and the collapse of the region’s economy. It’s very easy to see the end of the story (the adoption of cotton and sugar, incorporation into the United States, and the prosperity of the antebellum period) as inevitable, but that is certainly not how people at the time saw it. Many really did believe that slavery might well end or, if it did survive, limp on as an unprofitable system in a failed colonial project.

In 1802, a runaway slave advertisement appeared in Louisiana’s only newspaper announcing that four enslaved people had escaped from their enslaver, a sugar planter. They were Africans, representing three different ethnicities, and one, Pierre-Marc spoke Spanish, English, French, and Mobilian, a Native American trade language on the Gulf Coast.

I have no idea what ultimately happened to these escapees. However, their escape shows the collective ways enslaved people resisted their enslavers’ demands during the sugar and cotton revolutions. It also suggests how enslaved people were making new lives and communities in the region in the face of their brutal treatment.

I’m working on what I’m thinking of as a group biography of a Louisiana enslaver, John McDonogh, and two young enslaved men, David and Washington McDonogh, who John sent to college in the north as part of a larger plan he had to free all of the people he enslaved and send them to Liberia. John’s notion was that David and Washington would train to be the freed people’s doctor and preacher respectively. Ultimately, John followed through on his plan, but David’s and Washington’s lives in freedom diverged dramatically from what he had envisioned. What I particularly like about this project is that it is far more intimate than Replanting a Slave Society.