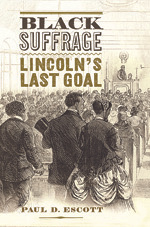 Today, we are happy to bring you our conversation with Paul D. Escott, author of BLACK SUFFRAGE: Lincoln's Last Goal

Studying Lincoln and the politics of emancipation convinced me that most of us don’t realize how powerful and deeply rooted were slavery and racism. Although ending slavery was a monumental achievement, vicious racist attitudes that had supported it remained ubiquitous in the North and well as the South. Lincoln himself had been a consistent advocate of removing Black people from the United States, but a few days before his death he endorsed the idea of voting rights, at least for some Black men. Therefore, I wanted to see what happened in 1865 to Lincoln’s last goal.

The failure to include Black people in the electorate was not due only to Andrew Johnson’s racism. I discovered that there was a substantial and surprising amount of support for Black suffrage in the spring of 1865. I learned a great deal about the efforts of abolitionists to influence public opinion through speeches, pamphlet campaigns, and newspapers. I’m sure readers will be as impressed as I was by the vigorous efforts of Black people, in both the North and the South, to demand their rights. In numerous conventions and public assemblies they petitioned lawmakers and fought for the suffrage and equal rights.

Unfortunately, I was not surprised by the relentless racism of that era’s Democrats. I had documented their hostility in “The Worst Passions of Human Nature”: White Supremacy in the Civil War North. If not “surprised,” I was once again impressed by the cultural power of racism in the Old Northwest – in states like Ohio and Indiana, which bordered Kentucky. The Republican Party was moving toward equality, sometimes swiftly, but in that region the opposition of Republican leaders remained a serious impediment to progress. Division among Republicans was an important reason for the failure of Black suffrage in 1865, as too many of them still shared the North’s widespread racism.

This may not qualify as an anecdote, but the story of George L. Stearns made a lasting impression on me. Stearns was a merchant and a manufacturer of sheet- and pipe-lead from Massachusetts, and he truly lived his egalitarian principles. During 1865 he created a directory so that advocates of Black suffrage could communicate with each other, and he funded numerous publications to advance the cause. Stearns almost bankrupted himself in the process, but he did a lot of good.

I hope to publish a book that profiles ten key political and social leaders of the long Civil War Era, from Henry Clay to Elizabeth Cady Stanton. I intend this book to be a classroom tool – something really useful for students and their professors, rather than as a book for academics. All the men and women whom I profile were crucially involved with, and important to, the issues of slavery and equality. I can see professors assigning parts or all of the book, to supplement their lectures and assignments, and the profiles present facts and arguments that will stimulate students to dig deeper. I’ve put four decades of research and teaching into the profiles and have made the writing lively.