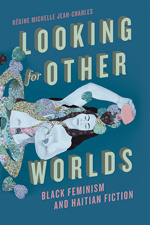 Today, we are happy to bring you our conversation with Régine Michelle Jean-Charles, author of Looking for Other Worlds: Black Feminism and Haitian Fiction

I was writing a different book about theorizing diaspora in the Haitian context when the inspiration for this book struck me. For that book on “jaspora” I planned a chapter on how contemporary Haitian writers represent the diaspora in their fiction. While conducting research for that chapter I chose to narrow my authors to Yanick Lahens, Kettly Mars, and Évelyne Trouillot and became so compelled by how their works were in dialogue with one another. Most of interest to me were the recurrent Black feminist themes amplifying how the intersections of race, gender, class, and sexuality shape the experience of their characters in diverse ways. At one point I said to the women in my writing group that I wanted to write a book focused only on these three authors. One of them asked in response “so why don’t you?” which is what led me to pivot and begin writing a book exclusively focused on these Lahens, Mars, and Trouillot.

I thought I was writing a book to share and illuminate how contemporary feminist writers represent Haiti with an ethic of care. What I learned from them was that in order to write about “an ethic of care,” I had to practice and embody that care myself. I also wrote with Gina Athena Ulysse’s Haiti Needs New Narratives in mind, determined to explore narratives that are in many ways about renewal. I hope that readers will learn from my book that Black feminism is alive and well in Haiti, and that there are many narratives flourishing in Haitian literature. I hope that this sense of flourishing, what Kevin Quashie calls “aliveness” and the ethic of care will remain with them long after they’ve read the book.

I was most surprised by the overwhelming presence of the environment and representations of nature in which feminism and a Vodou ethic intertwine.

In the first chapter I tell a story about my two grandmothers both of whom were born in Haiti during the US occupation. Their presence looms largely over the entire work and informs much of my own feminist consciousness and thinking. Perhaps, because, as Alexis Pauline Gumbs has said, “Black feminists tend to be obsessed with our grandmothers,” I dedicated my first book to them, but it is this book in which I see them the most. I also loved being able to incorporate the work of contemporary artists like Tessa Mars, Mafalda Mondestin, Rutshelle Guillaume, and Régine Romain. There was also an image by Nathalie Jolivert that did not make it into the book. When I was thinking about cover art I wanted to use Nathalie’s work and she kindly read the introduction and then made a beautiful piece based on her reading. It’s a print of a gorgeous brown-skinned woman surrounded by flowers that seem to be both consuming her and holding her up. That image of nature is a visual representation of the argument I make in my chapter about the environment.

I am currently working on two projects. One is a co-authored study of sexual violence entitled The Rape Culture Syllabus that is under contract with Columbia University Press. The other is a project on representations of Haitian girlhood in literature, media, and visual culture from Haiti and in the diaspora.