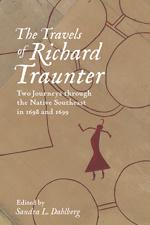 Today, we are happy to bring you our conversation with Sandra L. Dahlberg, editor of The Travels of Richard Traunter: Two Journeys through the Native Southeast in 1698 and 1699

I happened on Traunter’s journals by chance and immediately realized their significance to Southeastern history. Traunter was an experienced trader working for Colonel William Byrd when he recorded his treks between Virginia and South Carolina. Traunter secured trade pacts with eight Indian communities at the same time that he fomented anti-Occaneechi aggressions in others. He spoke at least three Native languages, so he had clearly traded with Indians for some time. Yet, unbeknownst to Byrd, he was also in a business partnership licensed by King William III to locate silver in Carolina. The Travels of Richard Traunter is an extraordinary treasure and this edition makes Traunter’s narrative accessible to scholars, students, and local enthusiasts interested in the complexity of Indian-Anglo relations in the late seventeenth-century Southeast.

I gained a deeper appreciation for an Indian man the English called Eno Will who was briefly mentioned by two of Traunter’s contemporaries. Will, the headman at Ajusher, led John Lawson through North Carolina in 1701. Thirty-two years later, William Byrd II asked Will about the location of a silver mine, but declined Will’s offer to take him to one. Eno Will was Traunter’s traveling companion on both journeys and Will played a central role in Traunter’s narrative. It was Eno Will’s diplomatic skill and regional prestige that facilitated Traunter’s trade pacts with various Indian Nations and ameliorated Traunter’s cultural missteps. Will also played a crucial role in locating and marking the site of a silver source in what is today South Carolina.

Given the contentious efforts to control trade with the Indians, particularly the Indian slave trade, the business Traunter conducted between Virginia’s Colonel William Byrd I and James Moore Sr. of South Carolina came as a surprise. No surviving letters link these two men who so influenced the trajectories of their colonies. Yet Traunter’s journals show Byrd and Moore collaborated with each other to transfer Indian slaves between the two colonies, and Traunter tied Byrd and Moore to events that appear in the records of both colonies. Traunter’s narrative also gives flesh to an often-cited set of English Board of Trade records about the English government’s silver project in the Carolinas.

I like that Traunter infused humor into his day-by-day account of life on the trading trail. Traunter was a seasoned back-countryman who enjoyed relished the foibles of his less-experienced companions as they mishandled firearms and learned how to dress game. He also described his own mishaps, particularly when a bear he was hunting nearly got the better of him. His gun misfired, wounded his dog, and nicked the bear. As he ran from the angered bear, his sword belt broke and his sword, caught between his legs, threw him to the ground in front of the charging bear. Traunter boasted that he “Shew’d” the bear “a fair pair of Heels” but the bear escaped as well.

I continue to conduct research based on The Travels of Richard Traunter. There are so many potential avenues to pursue. I am interested, for instance, in the collaboration between William Byrd I and James Moore Sr regarding the Indian slave trade that Traunter revealed. At present, I am investigating Eno Will, guided by the details provided by Traunter. The context of Eno Will’s life was extraordinary, shaped by demographic dislocation resulting from disease, war, the Indian slave trade, and the continual encroachment of English into Indian territories. The pivotal role Will played in Indian-English affairs warrants greater attention.