Author's Corner with Stewart Davenport, Author of Sex and Sects

Author's Corner with Stewart Davenport, Author of Sex and Sects 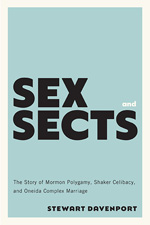 Today, we are happy to bring you our conversation with Stewart Davenport, author of SEX & SECTS: The Story of Mormon Polygamy, Shaker Celibacy, and Oneida Complex Marriage (April).

Back in 2008, when I started this project, I had just gotten married myself, so the institution was on my mind, and the societal debate over same-sex marriage was intensifying with California’s Proposition 8. I was attending a conservative church at the time with friends there encouraging me to vote one way, while my friends in the LGBT community very much encouraged me to vote the other way. I did not know what I thought about the issue, so I decided to write a book on the institution of marriage and how it can and has changed.

That religions change. We often think of religion as being fixed and unalterable when in fact it changes over time. This book is a story of changing religious beliefs and sexual practices as they relate to the institution of marriage. If my book can get readers to realize that all religions--including theirs--change over time, I will consider that a success. In addition, I hope that readers will learn more about the power of sectarianism, and how religious believers are most emboldened in their identities when they stand defiantly against the hostile powers that be.

The power of storytelling. I had never written a narrative history. My first book was an intellectual history that was thematically and not chronologically organized, so the form was new to me, but I fell in love with it. Storytelling not only keeps readers reading to find out what happens next, it also illuminates in ways that dry analysis cannot. In this book, story not only became an organizing principle but a powerful theme.

The anecdotes at the very beginning and end of the book. I simply love the story of those Perfectionists, trapped by a snowstorm, using those circumstances as an opportunity to consummate their developing antinomian sexual ideas. I also love having met some real, live polygamists and hearing them talk about their beliefs in a way that, yet again, confirmed the power of religious stories in the lives of believers. I also thought that it was just fantastic that the Mormons publicly announced polygamy on the exact same day that the Oneidans publicly re-announced their practice of complex marriage: August 29, 1852. No scholar has ever noticed that before, and while I did not notice it until late in the writing of this book, it strongly supports my story about the curious simultaneity of these religio-sexual experiments and their various phases of development.

Intellectually, I like to pick massively complicated questions to which I do not have the answers, explore them for years, and then turn my conclusions into a book. I should also say that I like to pick topics/problems that are ethically pressing in the present, but whose origins are deep in the past and thus open to historical exploration. This was true for my first book about capitalism and this second book about the institution of marriage. I did not know what I thought about either, and so I wrote books on them. Next--and likely for the rest of my career--I want to pick up the topic of racial truth and reconciliation in America; or, in a single word, reparations. Again, I do not know what I think about the topic, which will make exploring it rewarding and hopefully valuable to readers as American society continues to experience this long-overdue racial reckoning.