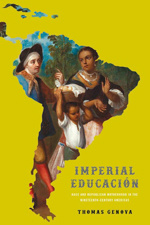 Today, we are happy to bring you our conversation with Thomas Genova, author of IMPERIAL EDUCACIÓN: Race and Republican Motherhood in the Nineteenth-Century Americas.

In the last generation, there has been a lot of important scholarship on the afterlives of colonial racial and gender structures in the Americas following independence. While most of this exciting work is either national or regional in focus, I wanted to consider these structures in the transareal framework of interactions among the different countries of the Americas. How do social hierarchies in one country become entangled with those in another? How do hemispheric racial and gender structures shape the lived experiences of specific individuals and communities? How do the hemispheric, the national, and the personal mutually constitute one another?

Just how deep and knotty these hemispheric entanglements are. We’re accustomed to thinking of colonialism in terms of large-scale transnational abuses concerning land tenure, enslavement, and the imposition of cultural models. Yet, events as seemingly local –and innocuous—as childrearing or the founding of public school systems in Argentina and Cuba also were fraught with imperial and anti-imperial implications, particularly in regards to the involvement of racialized populations in those processes. What these entanglements really point to is the ways that national elites in nineteenth-century Latin America negotiated the not-always-clear dynamics between local racial structures and transnational racial discourses in order to secure a place for themselves in the consolidating inter-American imperial system.

I was struck by how apparently antithetical projects become allied with one another. Public education is supposed to be a socially inclusive force, but Latin American elites in the nineteenth century used it as a form of social exclusion, as a means to contain the political power of marginalized groups through cultural indoctrination. Yet, this was driven (at least in part) by their fear of how the imperial powers of the Global North would perceive their largely non-white countries. In a move that appears counterintuitive to us today, nation-builders in Argentina and Cuba turned north for infrastructure to educate a republican citizen body able to resist foreign impositions, marshalling US cultural imperialism against US economic and military imperialism through school systems that were racial-colonialist in nature. These paradoxes force us to question our underlying assumptions about how progressive some ideas really were –without offering any clear-cut answers.

In the 1860s, the Argentine government hired a group of North American women as public-school teachers. The story is so famous in Argentina that even the taxi driver who picked me up at the airport in Buenos Aires wanted to share it when he heard what I was studying. Yet, the US teachers exerted little influence on Argentine education. The anecdote’s importance is more mythical than historical. Later, however, during the first US occupation of Cuba, some of these teachers participated in a special normal school designed to train Cuban women to teach civics, a movement ironically inspired by creole fears that Afro-Cuban voters would create political chaos and leave the island vulnerable to the U.S. This shows the messiness of nineteenth-century relations among creole elites, racialized populations in Latin American, and US empire.

I’m continuing to explore the Americas as a racialized geopolitical system in two new projects. The first follows the receptions of Argentine writer Domingo Faustino Sarmiento’s Civilización y barbarie (1845) in Brazil and that of Brazilian author Euclides da Cunha’s Os Sertões (1902) in Argentina as a way to map intra-South American conversations on race and national/regional identity at a moment when Latin America was falling increasingly under US imperial sway. The second looks at the figure of the Cuban creole in white supremacist discourse in the post-Reconstruction United States.