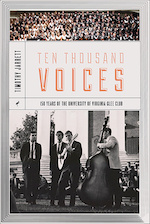 Today, we are happy to bring you our conversation with Timothy Jarrett, author of TEN THOUSAND VOICES: A History of the University of Virginia Glee Club and Its Times

I sang in the Glee Club as an undergraduate in the early 1990s and was always struck by two things: the longevity of the group (I started in the 120th anniversary year) and how little we seemed to know about its history. But twenty years ago, I did an idle Google search and came across Edward A. Craighill — widely credited with helping to compose “The Good Old Song” — in a picture of the Glee Club from 1893! I wondered, what other parts of our history and connection to the university might we reclaim? That’s when I started researching and writing the book.

What I found most interesting is the perseverance of students to organize together in song, even in a world that can be awfully indifferent, and how that perseverance makes leaders. I also learned that there is a story behind everything, and some stories, like the early Glee Club member who was paid for legal services for the former king of Albania with a bucket of diamonds and rubies, are far stranger than fiction.

I was surprised and heartened by the number of kindred spirits I found in Glee Club alumni who were years older than me, but who similarly cherished their time in the group—and were equally good packrats. A number of times I had conversations with someone who said, “I think I have some old photos,” and they turned out to be pure gold and come with amazing stories—like the photo we used on the cover, showing an early incarnation of the Virginia Gentlemen (then a subset of the Glee Club) wearing coat, tie and sunglasses and playing folk music on the steps of the Rotunda.

My favorite anecdote happened on April 13, 1993, Thomas Jefferson’s 250th birthday. The Glee Club had performance engagements at Monticello in the morning, on the Today Show, and then had to make it to the Jefferson Memorial in Washington, DC to sing at a ceremony honoring Jefferson where President and Mrs. Clinton were present. I don’t know what part of the day was more surreal — meeting Willard Scott coming out of the men’s room under Monticello, or running frantically from our delayed tour bus toward the Memorial, feeling as though snipers’ sights were trained on the backs of our blue blazers. There are some great photos from that day, including one of Katie Couric wearing a Glee Club cap with some of our members.

I’ve started to do some research a little closer to home, in a completely different part of American history. I have a great-great-grandfather who survived a court-martial as a deserter from the Confederate Army; the man who deserted alongside him was executed. Why did my ancestor desert? Why did he survive and his comrade die? That seems like a story worth learning more about.