Author's Corner with Will Visconti, Author of Beyond the Moulin Rouge

Author's Corner with Will Visconti, Author of Beyond the Moulin Rouge 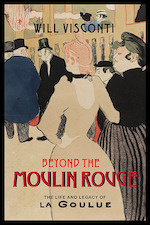 Today, we are happy to bring you our conversation with Will Visconti, author of BEYOND THE MOULIN ROUGE: The Life and Legacy of La Goulue.

I had already written about La Goulue as part of my PhD, so this gave me the chance to go further, and with a more singular focus. The lack of material about her was also a factor, since usually she’s a footnote in someone else’s story, and the same handful of anecdotes are repeated ad infinitum. When I discovered her diary in the course of my thesis research, it spurred me to want to know more, and then share that information, since Weber’s own account overturns so much of what is commonly written about her.

The main thing I hope readers will learn is that there’s so much more to Louise Weber’s story than the Moulin Rouge, and that she was much more than a dancer. She had a great sense of generosity with friends, neighbours and her family, whom she supported financially since her teens, and this side of her nature is lost amidst the stories that paint her one-dimensionally as a conceited brawler or party animal.

A lot of particularly fascinating things that I learned during my research were how La Goulue’s achievements and choices fit within the context of late nineteenth and early twentieth-century law, and how she witnessed but seldom had the chance to benefit from changes like education reform, divorce laws, and loosened strictures on women’s financial independence.

How much more La Goulue achieved, and how much she had to overcome. Learning about the court cases and abusive relationships that she endured threw a new light on how she created her public persona – she was tough out of necessity, but also had to contend with men around her who couldn’t cope when she was the bigger star or wealthier partner, or she had to fight to be heard. There are lots of parallels with other famous women whose personal lives have been tabloid fodder (Marie Lloyd or Britney Spears are two examples) and, depressingly, where the same moral double standards have been present as today, moralising when Weber was seen to misbehave, but dismissing her when she tried to be taken seriously.

There are a lot that had to be cut, unfortunately, but what was particularly enjoyable was hearing Louise Weber’s “voice” when it leapt off the page. She was often interviewed in her later years, and took the opportunity to remind the public that she was still active and full of energy, even if her memories were sometimes fuzzy since she had become, in her own words, “an old fart”. When newspapers mistakenly ran her obituary in 1918, she used the publicity to not only garner more interviews, but more engagements as a performer. La Goulue danced and acted in a comedy sketch that satirized the “news” of her death, which sums up her attitude: cheeky, pragmatic, and able to see the humour in her situation.

There’s still more to explore about La Goulue or the cast of characters around her, so my current projects look at other aspects of La Goulue’s life, and her world more broadly during the fin-de-siècle.

- Promotional postcard of La Goulue and her husband José Droxler, c.1900-1904. Collection of the author.