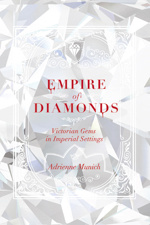 We are delighted to offer the fourth installment in our new podcast series, "UVA Press Presents," via this interview with Eric Brandt, Assistant Director and Editor-in-Chief at UVA Press and Adrienne Munich, Professor of English, Art, Cultural Studies, and Gender Studies, Emerita, at Stony Brook University and author of the new book EMPIRE OF DIAMONDS: Victorian Gems in Imperial Settings. Listen above, and find out what inspired Munich to write the book below.

When I was thirteen, a time when my pre-adolescent high spirits underwent social control, I was fitted with braces by a kind orthodontist whose 8th floor office was in the glorious Art Deco Fisher Building in Detroit, Michigan. Built by Albert Kahn, the building’s roof was originally tiled with gold leaf shingles until World War II, when the roof was muffled to avoid Nazi bombs. At the time of my visits, in the 50s, it housed ritzy tenants and ordinary ones, like my dentist.

Rather than drive me to my dentist appointments, my mother permitted me to take the bus, the stop being only a half-block from my house on a main street where I had recently been bombarded with cat calls from passing vehicles. Clad in a proper skirt that muffled my golden-tanned legs, I waited for the bus. Mother assumed that my appointments were long, but I left home early to gaze at the first-floor jeweler’s sumptuous, frequently changing display of diamonds. I was hooked.

That diamond high shielded me from the pain of ever-tighter hoops and bars on my crooked teeth. The dentist regarded me as the perfect teen patient, given that diamond junkies lay outside his knowledge base. In competition to those gems, my metal mouth might also have dazzled viewers, but I muffled its shine by smiling with my mouth closed.

Later, in my twenties, my friends and I crooked our extended wrists to display our diamonded ring fingers. Except for that badge of amorous triumph, I mostly forgot diamonds. Or repressed them. In truth, diamonds shaped my imaginative subconscious, only to surface when the Victorians brought them to mind in all their glory. I had grown up to become a scholar of the Victorian period and a feminist. I wrote a book about Queen Victoria, called Queen Victoria’s Secrets. One of her secrets, she revealed to me, was that she was the Queen of Diamonds. During her reign the British Empire controlled the world’s diamonds, first when the British took over India, originally the main source of diamonds, from the British East India Company. Then, thirty years into Victoria’s reign, white prospectors discovered huge diamond lodes in southern Africa, so the British took that area as well. That imperial trajectory became the foundation of Empire of Diamonds, a book about ways that diamonds infiltrated the British imaginary. Empire surveys British diamond territories—India, England (the diamond market), and South Africa, with a nod to America—and discusses literary works, diaries, letters, journals and other writings that depend upon readers’ appetites for diamond stories and diamond images. Sifting through tons of material, I limited my book to exquisite or rare examples that reveal varieties of diamond fascination. I discovered that diamonds are about death as well as dynastic power and love. In that context I discuss one contemporary work of art—a diamond-encrusted eighteenth-century skull that flaunts its original owner’s perfectly aligned set of teeth.