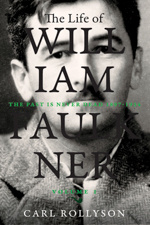 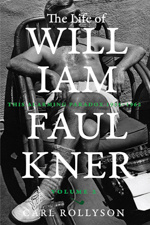 We are delighted to introduce our new podcast series, "UVA Press Presents," via this interview with literary biographer Carl Rollyson, author of the new two-volume series THE LIFE OF WILLIAM FAULKNER, and Stephen Railton, Emeritus Professor of English at the University of Virginia and Director of the Digital Yoknapatawpha project. Listen above, and read more, including an excerpt from THE LIFE OF WILLIAM FAULKNER, VOLUME 1: The Past Is Never Dead, 1897-1934, which Kirkus Reviews in a starred review called "A filling, satisfying feast for Faulkner aficionados," here and stay tuned for more on THE LIFE OF WILLIAM FAULKNER, VOLUME 2: This Alarming Paradox, 1935–1962, of which Publishers Weekly in a starred review said "Rollyson’s painstakingly researched and beautifully written biography should be a touchstone for Faulkner scholarship for years to come coming this September," here. And remember to place an order for 30% off these and other titles through June 30th with code 10READ.

My interest in biography began with work on William Faulkner for a dissertation I completed at the University of Toronto in 1975. I became fascinated with the way his characters composed their life stories and the stories of others, transforming the meaning of the past as they re-constructed it. But it was not until I read Norman Mailer’s biography of Marilyn Monroe that I realized that biography should be my chosen form of expression. He noted the different ways her life could be told and how his own work as an artist drew him to her story. While reading about her I relived my own early attraction to acting and reflected on how it had shaped my personality. And that was what I wanted to do for her, present her story as the life of an actress, which meant interviewing those who worked closely with her to understand how she prepared for her role and what they meant to her. Since then each new biography has been an autobiography, so that I could, for example, recall my own first reaction to visiting England in 1963 just a few months after Sylvia Plath had died. Part of the thrill of doing biography is meeting those who knew my subjects—like the actress Susan Strasberg who read my horoscope in Birmingham, Michigan shortly after appearing in a play, Agnes of God. Susan ratified what I had written about Marilyn Monroe and the importance of acting in shaping her life. Later, it was the same with critic Al Alvarez who welcomed me warmly into his Hampstead home to discuss what it was like to know Sylvia Plath and to be attracted to her orbit. Biography has been a surprising journey that has put me into contact with people I would not otherwise have encountered—like the actor Walter Matthau calling me up because a letter I wrote to him had inspired his call. Biography is a calling, an effort to honor and to do justice to an important life. In Faulkner’s case, I felt driven, after reading so many biographies of him, to try yet another one because I believed so much of how Hollywood had shaped him had been ignored in previous accounts. And I felt I knew Hollywood, the actors and agents who had welcomed me and made my work possible. I also wanted to return, at this late stage in my work as a biographer, to my first literary love, to William Faulkner whose family—his nephew Jimmy, his niece, Dean—I had met in Mississippi over four decades ago. Biography, I believe, is another way to complete a life, my own and those I write about.

After teaching American literature at the University of Virginia for forty-five years, Stephen Railton is now an Emeritus Professor of English. In addition to publishing widely on American literature, since the mid-1990s he has been at the forefront of developing digital humanities initiatives. His web projects include Mark Twain in His Times, Uncle Tom's Cabin & American Culture, and three Faulkner projects: Absalom, Absalom! An Electronic Chronology, Faulkner At Virginia: An Audio Archive, and in collaboration with an international team of scholars, Digital Yoknapatawpha – which is still very much a work in progress.

Created and directed by Stephen Railton, Digital Yoknapatawpha (faulkner.iath.virginia.edu) is a collaboration between an international team of Faulkner scholars and a team of technologists at the University of Virginia designed to see how much the art of William Faulkner and the capacities of digital humanities can reveal about each other. The University of Virginia Press will soon publish a collection of essays by a dozen of the collaborators on the project.