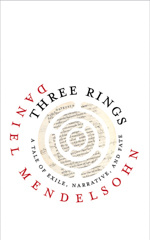 We are delighted to offer the fifth installment in our new podcast series, "UVA Press Presents," via this interview with Daniel Mendelsohn, Editor at Large at The New York Review of Books and author of Three Rings: A Tale of Exile, Narrative, and Fate and Jahan Ramazani, University Professor and Edgar F. Shannon Professor at the University of Virginia. Listen above, and read more about Professors Mendelsohn and Ramazani below.

DANIEL MENDELSOHN is a frequent contributor to The New Yorker and The New York Review of Books, where he is the Editor at Large. His books include the international best sellers An Odyssey: A Father, A Son, and an Epic, a PBS/New York Times Book Club Pick and a Best Book of the Year by NPR and many others, and The Lost: A Search for Six of Six Million, winner of the National Book Critics Circle Award and the Prix Médicis in France; a memoir, The Elusive Embrace, a New York Times Notable Book and a Los Angeles Times Best Book of the Year; a translation, with commentary, of the complete poems of C. P. Cavafy; and three collections of essays, Ecstasy and Terror, How Beautiful It Is and How Easily It Can Be Broken, and Waiting for the Barbarians. Three Rings: A Tale of Exile, Narrative, and Fate is his tenth book. A professor of Humanities at Bard College, he is Director of the Robert B. Silvers Foundation. www.danielmendelsohn.com.

JAHAN RAMAZANI is University Professor and Edgar F. Shannon Professor of English at the University of Virginia. He is the author of the forthcoming Poetry in a Global Age (2020). His previous books are Poetry and Its Others: News, Prayer, Song, and the Dialogue of Genres (2014); A Transnational Poetics (2009), winner of the 2011 Harry Levin Prize of the American Comparative Literature Association; The Hybrid Muse: Postcolonial Poetry in English (2001); Poetry of Mourning: The Modern Elegy from Hardy to Heaney (1994), a finalist for the National Book Critics Circle Award; and Yeats and the Poetry of Death: Elegy, Self-Elegy, and the Sublime (1990). He is the editor of “Poetry and Race,” a special of New Literary History (2019), and of The Cambridge Companion to Postcolonial Poetry (2017); a co-editor of the most recent editions of The Norton Anthology of Modern and Contemporary Poetry (2003) and The Norton Anthology of English Literature (2006, 2012, 2018); and an associate editor of The Princeton Encyclopedia of Poetry and Poetics (2012). Elected to the American Academy of Arts and Sciences in 2016, he is a recipient of a Guggenheim Fellowship, an NEH Fellowship, a Rhodes Scholarship, the William Riley Parker Prize of the MLA, and the Thomas Jefferson Award, the University of Virginia’s highest honor.