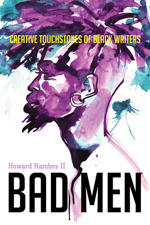 We are delighted to offer the third installment in our new podcast series, "UVA Press Presents," via this interview with Howard Rambsy, Professor of English at Southern Illinois University Edwardsville and author of the new book Bad Men: Creative Touchstones of Black Writers. Listen above, and find out what inspired Rambsy to write the book below.

Every year for more than a decade and a half now, I have taught a literature course comprised of all first-year collegiate black men. At some point, I realized that during our wide-ranging class discussions and debates, we were constantly touching on subjects related to bad men and vulnerable black boys.

Later, in spaces beyond those classes, I was researching the critical discourse concerning creativity research. I was thinking about invention, productivity, originality, creative domains, and muses, which I started thinking of as touchstones for creativity. When I combined my readings in creativity research, contemporary black writing, and African American literary studies, along with my conversations with all those collegiate black men, I ended up on subjects that eventually became Bad Men: Creative Touchstones of Black Writers.

On the one hand, it felt like an extended journey to get to this point. But then at the same, given my experiences, the subject matter felt like it was always right there around the corner waiting for me to write it up.

The first part of the book is about the ways bad men inspired extraordinary creative output by a variety of creative writers, especially black men writers. The second portion of the book discusses the ways that vulnerable black boys, including Trayvon Martin and Mike Brown, prompted writers to produce a remarkable body of work.