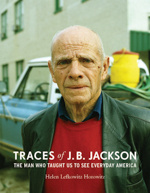 We are delighted to offer the second installment in our new podcast series, "UVA Press Presents," via this interview with Pulitzer-Prize nominated author Helen Horowitz, author of the new book **TRACES OF J. B. JACKSON: The Man Who Taught Us to See Everyday America, **and Daniel Horowitz, Mary Huggins Gamble Foundation Chair and Professor of American Studies Emeritus, Smith College. Listen above, read profiles of Helen and Dan Horowitz below, and read more about the book, which The New York Review of Books called "[An] excellent biography," here. And remember to place an order for 30% off this and other titles through June 30th with code 10READ.

I don’t think I was destined from birth and early life in Shreveport, Louisiana, to write the biography of J. B. Jackson. When I graduated from C. E. Byrd High School in 1959, one likely thought of me only as a “serious student” with enough activities to get to a good college. I carried that seriousness to Wellesley, where I had the great luck as a Freshman to meet Daniel Horowitz, who was then a Yale Senior. After majoring in history, graduating, and getting married to Dan, I took a year-long pause to work as an archival assistant, and archival discovery became a passion. I entered Harvard as a graduate student in American Civilization, where its professors failed to discourage me; and I received my PhD in 1969. I had the usual short-term teaching jobs until moving with Dan and our young son to California and a position at Scripps College. I left there in 1986 to go to the University of Southern California, and in 1988—with that son entering college and a daughter now entering sixth grade—both Dan and I got teaching jobs at Smith College and moved to Massachusetts. As much as I thrived as a professor, giving lectures and seminar and working closely with students, I continued my love of research and writing. As an “archive nut” who enjoys close research in collections. I’ve been able to range far and wide, picking up fields as I found good sources and publishing books and articles. These have included successive forays into cultural philanthropy, women, higher education, buildings and landscapes, sexuality, sexual representation, censorship, understandings of mental health and illness, intimate life, tourism, and biography.

It was in 1972 that Dan and I had the good fortune to meet J. B. Jackson. I began a correspondence with him, and, with Dan and our two children, visited him in his home in New Mexico during summers. I began to teach about the American landscape, and Jackson’s work also inflected my writing. In 1994, he let me tape conversations about his life and thought. He named me his literary executor and gave me permission to prepare a select collection of his essays, a project that became Landscape in Sight, (1997). The book included a biographical introduction based on our 1994 taped sessions. On one of my visits, I got him to stop burning his papers and, instead, to entrust them to me. After his death, I read those papers for the first time, and they revealed much about him that I did not know. I knew then that one day I would read them carefully, as well as research his professional papers that I had entrusted (along with the literary executorship) to the Center of Southwest Research at the University of New Mexico, and—from those materials—write his biography. His death was a great loss. It took me two decades before my sadness had dissipated enough for me to be able to begin writing Traces of J. B. Jackson. He was indeed the man who taught me and others to see everyday America.

Daniel Horowitz, Mary Huggins Gamble Foundation Chair and Professor of American Studies Emeritus, Smith College, is a historian whose work focused on the history of consumer culture and social criticism in the U.S. Among the honors he has received are two fellowships from the National Endowment for the Humanities and one from the National Humanities Center; and a fellowship from the John Simon Guggenheim Memorial Foundation. His most recent books are Entertaining Entrepreneurs: Reality TV’s Shark Tank and the American Dream in Uncertain Times (University of North Carolina Press, 2020) and Happier? The History of a Cultural Movement That Aspired to Transform America (Oxford University Press, 2018)