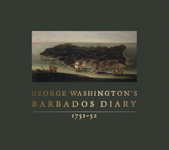 We’re pleased to announce the addition of the recently published edition of George Washington’s Barbados Diary, edited by Alicia K. Anderson and Lynn A. Price, to The Papers of George Washington Digital Edition, and to offer this wonderfully annotated text free of charge to interested readers through the middle of August.

George Washington's Barbados Diary, 1751–52, is noteworthy as one of the only documents of any length and complexity from Washington’s youth before his appearance on the public stage. Because he kept the diary only for himself, the entries—despite their often exasperating brevity—evidence interests and emotions not revealed in any other source. His candid writings also provide an interesting glimpse into Barbadian aristocratic culture, as the young Washington commented on a plantation society both similar and different from his own. Novel experiences abounded throughout his travels between Virginia and the Caribbean, and his curiosity to explore and observe is front and center. Washington's keeping of a formal ship’s log on the progress of the outbound voyage displayed his fascination with navigation, measurements, and mathematics, all central to his chosen profession of surveying and his later career as a military leader. Learning through reflection and experience became lifelong habits for Washington.

The diary also captures the impressions and rarely seen emotions of an ambitious young man rising in society, exposed to an exotic landscape, new cultures, sea travel, and the dread of smallpox. Famously reserved and inscrutable as an adult, Washington allowed himself to admit weakness and fear in his youth. Persistent storms and heavy seas on the return voyage to Virginia plagued Washington with seasickness and required the crew to struggle day after day to keep the ship afloat and on course. It is not difficult to sense the fear he felt for his life or to comprehend why he never again took an ocean voyage. Without the Barbados Diary, we would not know nearly so much about the maturation of Washington's mind or temperament.

The preparation and publication of George Washington's Barbados Diary was made possible thanks to the generous support of the Mount Vernon Ladies’ Association of the Union. Mount Vernon has also provided funding for The Papers of Martha Washington (to be published in Fall 2021) and the Washington family papers edition, which will include the papers of Bushrod Washington.