Behind The Eyes of Tammy Faye: Margaret Grubiak on Heritage USA

Behind The Eyes of Tammy Faye: Margaret Grubiak on Heritage USA 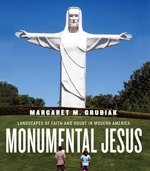 We are delighted to offer this blog post by Margaret Grubiak, author of MONUMENTAL JESUS: Landscapes of Faith and Doubt in Modern America, on the new film The Eyes of Tammy Faye and Heritage, USA in Fort Mill, South Carolina.

In the new film The Eyes of Tammy Faye, actress Jessica Chastain portrays Tammy Faye Messner (1942-2007), Pentecostal televangelist partner to first husband Jim Bakker (played by Andrew Garfield). The dramatic ups and downs of Tammy Faye’s life have long been the subject of popular culture interest, one often focused on her physicality. Tammy Faye was famous for her overly done clothing, hair, and makeup, particularly the mascara that would run down her face from tears during their Praise The Lord (PTL) Club television show watched by millions daily. Tammy Faye’s expressive eyes, framed by this thick, black mascara, are the genesis of The Eyes of Tammy Faye.

I was thrilled to see this movie given my study of the fantastical Heritage USA theme park in Fort Mill, South Carolina, which Jim and Tammy Faye Bakker imagined, constructed, and ran together from 1978 until 1987 when financial and sexual scandals led to the imprisonment of Jim Bakker. (Heritage USA ultimately closed in 1989 due to bankruptcy, following a takeover of the park by Jerry Falwell Sr.) Heritage USA was among the most popular theme parks in the United States in that era, ranking behind only Walt Disney World and Disneyland. Indeed, the Bakkers took the Disney properties as their literal inspiration. Tammy Faye once said, “I have been to many places, but if my Utopia could look any way I wanted it to look, I’d like it to look like Disneyland.” At the Bakkers’ Christian-focused theme park, largely constructed by Roe Messner (later second husband to Tammy Faye), people came for wholesome recreation at the RV campgrounds, a carousel, a miniature train, swimming pools, and tennis courts. The Heritage Island water park thrilled visitors with its 60-foot high Typhoon waterslide, down which the Reverend Jerry Falwell famously descended in a 1987 fundraising stunt. The indoor Main Street shopping mall—unabashedly modeled after Disney’s Main Street—included the Heavenly Fudge Shoppe, Heritage Gift Shoppe, Ye Olde Bookstore, and Noah’s Toy Shoppe, where visitors could buy the Susie Moppet Doll (featured in the movie) that played a recording of Tammy Faye’s voice. The shopping mall also offered the Royal Hair Salon, Tammy Faye-approved makeup, and even lingerie to support “healthy marriages.” The theme park grounds included the television studios for the PTL Club. A more traditional worship space can still be found today in the Upper Room Chapel, a re-creation of the Upper Room in Jerusalem which tradition holds was the site of the Last Supper and reappearance of Jesus to his disciples following his resurrection. (Jessica Chastain as Tammy Faye says in the movie about the Upper Room Chapel: “If you can’t go to Jerusalem, you can go to Heritage USA.”) Heritage USA’s architecture was a pastiche of wide variety of styles: rustic, Victorian, Colonial Revival. While much of Heritage USA has been dismantled, you can find a close version of it in the Morningside Church near Branson, Missouri, where Jim Bakker continues his religious broadcast ministry.

I argue in my book, Monumental Jesus: Landscapes of Faith & Doubt in Modern America, that we can best understand Heritage USA within the larger context of the evangelical theme park and the electronic church. The Bakkers were not the only televangelists in the second half of the twentieth century to create theme parks that doubled as the headquarters for their electronic ministries. Pentecostal (and later Methodist) televangelist Oral Roberts created Oral Roberts University in Tulsa, Oklahoma in the 1960s and 1970s (and The Eyes of Tammy Faye features this campus). Much more than a university, the ORU campus served as a stage set for his religious programs. Reverend Robert Schuller’s Garden Grove Community Church in Anaheim, California; Pat Robertson’s Regent University and Christian Broadcasting Network in Virginia Beach, Virginia; and Jerry Falwell Sr.’s Liberty University in Lynchburg, Virginia were all similarly campuses that located the electronic church in real space and time. The tradition of the evangelical (or more appropriately fundamentalist) theme park persists today in the Ark Encounter and Creation Museum theme parks in Kentucky, constructed by the Young Earth creationist group Answers in Genesis.

In a scene in The Eyes of Tammy Faye when Jim Bakker and builder Roe Messner are discussing the construction of Heritage USA, Tammy Faye says, “Buildings are miracles.” That these ambitious, expensive, and lavish theme parks paid for with money from “prayer partners” have become a part of the American landscape was indeed a miraculous realization of religious belief, mixed in with American popular culture.