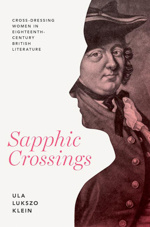 June is Pride Month, and I’m proud to be a member of the LGBTQ community, working on LGBTQ literary and cultural history. My book, Sapphic Crossings: Cross-Dressing Women in Eighteenth-Century British Literature (UVA Press, 2021), looks at the lesbian, transgender and nonbinary histories that many people today haven’t heard of—yet.

Many people associate Pride celebrations with parades, rainbow gear, and parties, and for many people, Pride is associated primarily with gays and lesbians. In fact, sometimes Pride is called “Gay Pride.” What many do not know is that the Stonewall Riots that happened at the end of June 1969—the reason why Pride month is the month of June—were instigated by long-time transgender activists of color, including Marsha P. Johnson and Sylvia Rivera, both of whom worked to promote LGBTQ rights for many years before and after the riots.

Transgender and gay history are intertwined with one another, even if many people don’t always think about them that way. But gender and sexuality are difficult to extricate from one another. After all, gay couples are defined as gay because they are two people of the same gender. Despite the close connections between these categories, they are often talked about, thought about, and written about as separate.

When it comes to historical research into the lives of people who may or may not have been gay or bisexual or transgender, it becomes even harder to label anyone because we can’t go back in time to ask them how they thought of their gender identity or sexual orientation—and how they felt about those things might not easily align with the language that we use today. As any historian of sexuality will tell you, people did not always think of their sexuality as a part of their identity, like their gender, class, or nationality, while gendered categories of existence varied from culture to culture and across time and place.

And yet, I believe it is extremely important to look into the past to find traces of LGBTQ people—not to “label” people of the past, but rather to understand the role of LGBTQ people and identities in the past and today as part of mainstream culture, rather than on the peripheries. In my book, I consider people like Mary/George Hamilton, whose story was salaciously retold in an extremely fictionalized manner by major eighteenth-century author Henry Fielding, author of Tom Jones and many other novels and plays.

This fictionalized story, published anonymously as The Female Husband, fascinated eighteenth-century readers, and was widely available throughout Britain from its publication in 1746 and into the nineteenth century. The narrative presents Hamilton as a person assigned female at birth, seduced by a lesbian Methodist, who finally ran away from home in men’s clothing and went on to seduce—and marry—several women in England before being apprehended and charged with fraud and vagrancy by the local courts.

Hamilton’s dressing in men’s clothing and using a man’s name places them squarely in the realm of transgender history. And yet, for the narrator of the text, it is Hamilton’s desires for women that are problematic—placing their narrative into the realm of proto-lesbian history.

The intertwined history of transgender identity and gay and lesbian identity needs to be acknowledged.  Just like the history of Pride month, the longer history of LGBTQ identities is one made up of many intertwined strands. I’m proud to contribute to excavating and analyzing that history in my book, primarily by looking at what popular literary texts can tell us about how lesbian desires and trans embodiments were represented in narrative.

Ula Klein is Director of Women’s and Gender Studies at the University of Wisconsin–Oshkosh and author of Sapphic Crossings: Cross-Dressing Women in Eighteenth-Century British Literature.