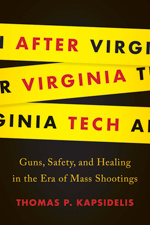 Last year, UVA Press was proud to publish Tom Kapsidelis’s After Virginia Tech: Guns, Safety, and Healing in the Era of Mass Shootings, which illuminates the experiences of the survivors of the 2007 Virginia Tech massacre—then the deadliest to date—and other community members and portrays in depth their advocacy for reforms in gun safety, campus security, trauma recovery, and mental health over the past decade. Now this book is also available in paper, and the author has created study guide questions for college students and book club questions for general readers to ponder. We invite you to check out these resources and to read Tom Kapsidelis’s reflections on evolving student activism around the issue of gun safety—a topic that remains highly pertinent in 2020.

In the bitter campaign year of 2020, I’ve often thought about Colin Goddard’s meeting with Vice President Joe Biden after the shootings at Sandy Hook Elementary School in Newtown, Connecticut, in 2012.

President Barack Obama had established a vice presidential task force that sought the views of shooting survivors, including those from Virginia Tech. Goddard, shot and wounded in his French class, had become a national gun safety advocate. In an interview for my book, After Virginia Tech: Guns, Safety, and Healing in the Era of Mass Shootings, Goddard told me that rather than push legislation with the vice president, he took a more personal approach. When Biden subsequently introduced the president at a White House meeting to announce the administration’s gun safety objectives in early 2013, he reflected on what he had learned from Goddard.

Though the U.S. Senate rejected gun safety legislation on what Obama called a “shameful day,” the drive for change that grew from Newtown, Blacksburg, and other communities torn by gun violence would continue. Survivors and their supporters fostered an empathy that they understand best—and perhaps President-elect Biden does as well.

Since 2018, we’ve watched as the students and families from Marjory Stoneman Douglas High School in Parkland, Florida, established those same types of connections. It was also a reaffirmation for the Tech survivors, who are credited with helping build a template for involvement. Their work achieved prominence beyond Second Amendment issues, addressing community safety, the needs of survivors, and mental health.

“I see us in them—but with a platform, since social media has come so far since 2007,” said John Woods, a Tech graduate who was honored by the Obama White House for his gun safety advocacy in Texas. Goddard told me he felt the same sentiment, as did Kristina Anderson, a shooting survivor whose foundation has focused on safe communities, violence prevention, and trauma recovery.

They speak directly to a generation that has grown up amid the dangers of gun violence. In March 2018, The Washington Post reported that over the two decades since the Columbine High School attack in 1999, more than 187,000 primary and secondary students “have experienced a shooting on campus during school hours.” The Post called this “the collateral damage of this uniquely American crisis.”

Through the voices of Anderson, Goddard, Woods, and others, today’s college students can learn about the long journeys that continue after the glare of immediate news coverage fades. The Tech graduates know the challenges of physical recovery and what goes into coping with the emotional trauma and memories that endure over a lifetime. Some are now parents, bringing added dimensions to how they view their experiences.

I was drawn to this history from my work for the Richmond Times-Dispatch, which assigned me to Blacksburg to organize and edit the coverage on April 16, 2007. Thirty-two students and professors were slain on that unseasonably cold morning. At the time it was the nation’s largest contemporary mass shooting. I arrived on campus about 4 o’clock that afternoon and remained on duty over the next two days.

When I returned to Richmond later that week, I sensed that the tragedy could lead to reforms—that legislators would embrace gun safety laws and other measures to make Virginia safer and honor the memories of those killed. That sense of optimism dimmed as I observed little change over the next three years. What I saw instead was that even while Tech families were undergoing their own physical and emotional healing, they were engaged in mighty struggles—from accountability questions regarding what took place before, during, and after the attack to the realities of advocating for gun safety legislation during an era of expanding gun rights.

I began reporting for my book at the third anniversary memorial at Virginia Tech on April 16, 2010, which was followed three days later by armed gun rights rallies in Northern Virginia that presaged today’s threatening armed Second Amendment demonstrations.

What unfolded for me was a multigenerational history, involving young people and their families whose lives were changed by their work as advocates. As a graduate student in Texas, Woods, whose girlfriend was fatally shot at Tech, made connections with survivors of the 1966 University of Texas Tower shootings who were opposed to the carrying of concealed weapons on campus.

Virginia finally achieved a historic breakthrough when the 2020 General Assembly approved a package of gun safety laws after 13 years of tireless lobbying led by Lori Haas, whose daughter, Emily, was wounded at Tech, and Goddard’s father, Andrew Goddard. But it also took a political power shift at the Capitol—Democrats won control of the House and Senate in 2019 after Republicans quickly shut down a special session on gun safety that Gov. Ralph Northam called in response to the murders of 12 at the Virginia Beach Municipal Center.

The debate for national reforms, meantime, continues in Washington, where progress thus far has remained elusive under a divided Congress and a divisive presidential administration in 2020. Gun sales are at record levels, weapons are carried openly at political rallies, and more than a dozen men in Michigan have been charged in connection with a plot to abduct the governor. And as the nation struggles with the pandemic, many communities have seen an increase in gun violence.

But Biden now gets a chance to make good on his promise to Goddard. This time, the connections across the decades have been well established. The work of the Virginia Tech community can help make today’s students aware of what’s at stake in the push to create a safer nation. We can hope that future generations might read the Tech students’ experiences as history, and not as their reality.