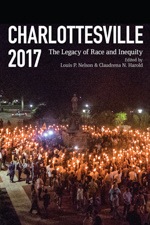 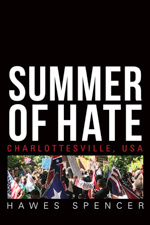 Five years ago, on August 11th and 12th 2017, hate groups descended on Charlottesville and the University of Virginia, seeking to terrorize the community and garner attention for their contemptible views. The deadly result reverberated around the country and the world. Ever since, people have tried to understand the events of those infamous few days; to put them into their proper political, cultural, and historical context so that they and future generations could grasp the full impact of what happened here. The following summer, UVa Press published two books that sought to help do that.

Summer of Hate: Charlottesville, USA is investigative journalist Hawes Spencer’s probing account of August 11 and 12. Telling the story of those days from the perspectives of figures on all sides of the demonstrations, Spencer, who reported from Charlottesville for the New York Times, carefully recreates what happened and why. Focusing on individuals including activists, city councilors, faith leaders, and the police, Spencer creates a panoramic narrative that renders these dramatic events, and the ongoing conflicts underlying them, in all their complexity.

Charlottesville 2017: The Legacy of Race and Inequity comprises the work of UVA faculty members catalyzed by the events of August 11th and 12th to examine their community’s history more deeply and more broadly. Their essays—ranging from John Mason on the local legacy of the Lost Cause to Leslie Kendrick on free speech to Rachel Wahl on the paradoxes of activism—examine truth telling, engaged listening, and ethical responses, and aim to inspire individual reflection, as well as to provoke considered and responsible dialogue.

The investigation and discussion continues today. Next spring, UVA Press will publish UVA media studies professor Aniko Bodroghkozy's book Making #Charlottesville: Media from Civil Rights to Unite the Right, which traces the similarities and connections in media coverage between August 11th and 12th and the iconic civil rights campaigns of a half-century ago. We encourage everyone to read her recent Boston Globe article, which draws from her forthcoming book and speaks to these continually pertinent issues.

The events of August 11th and 12th continue to define our contemporary political environment and UVA Press is proud to contribute to the ongoing conversation.