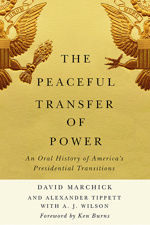 UVA Press extends our congratulations to David Marchick, coauthor of the forthcoming The Peaceful Transfer of Power: An Oral History of America’s Presidential Transitions, on his appointment as the new Dean of American University’s Kogod School of Business. Marchick is the former director of the Partnership for Public Service’s Center for Presidential Transition, former managing director at the Carlyle Group, adjunct professor at the Tuck School of Business at Dartmouth College, and served as chief operating officer and senior Biden appointee at the United States International Development Finance Corporation.

In his new position at the Kogod School of Business, Dean Marchick will lead almost 2,000 students and oversee more than two dozen undergraduate and graduate degree and certificate programs at the head of an institution that continues to climb the national rankings.

This October, UVA Press, in association with the Partnership for Public Service and with the University of Virginia’s Miller Center of Public Affairs, is delighted to publish The Peaceful Transfer of Power, which Dean Marchick co-wrote with Alexander Tippett and A.J. Wilson. The book, set to appear in our Miller Center Studies on the Presidency book series, is an extension of Transition Lab, the Partnership for Public Service podcast series Marchick hosted in 2020, and builds on his experience as an advisor to President Biden’s transition team, when he worked closely with White House officials and coordinated with more than one hundred federal agencies, as well as his past work in the Clinton Administration with the Department of State, the Department of Commerce, and the White House.

“As the whole country gains a new awareness and appreciation of presidential transitions, we feel lucky and honored to be publishing a book on such a timely subject with David Marchick and his esteemed cast of collaborators,” said Jason Coleman, Interim Director of UVA Press.

Marc Selverstone, co-editor of the UVA Press and Miller Center “Studies on the Presidency” book series, added that, “With his vast, deep, and intimate knowledge of presidential transitions, involving the extraordinary challenge of managing people, priorities, policies, and process, David Marchick is well positioned to assume leadership of American’s Kogod School of Business.”

We invite you to read American University’s full announcement here.