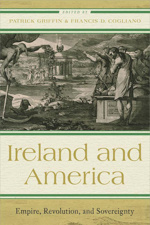 Below, Patrick Griffin, co-editor, with Francis D. Cogliano, of Ireland and America: Empire, Revolution, and Sovereignty, reflects on the origins and meaning of this celebration.

St. Patrick’s Day is all about connection. And disconnection.

Although the Irish have been celebrating the day for centuries, often with a great deal of drinking and partying before the Famine, the day as we know it is really one for the diaspora. Americans, New Yorkers especially, were the first to parade. They did so to claim space in the city and to assert themselves in a plural new world. They had to take what they got. Other centers of Irish immigration followed suit, though on not the same massive scale as New York. The mawkish green--the green beer and green rivers—well, that’s all American.

Now, though, the Irish themselves have adopted these diasporic practices as their own. So, the day speaks to the ongoing entanglements of the two places, and it reminds us how complex they are. The book, of course, does the same, but it does so by examining the ties—and disjunctions—between Ireland and America during one of the most formative periods of global history: the age of revolution. Not so surprisingly, it would be at this moment, when nations were coming into being, when St. Patrick’s Day as a celebration of the idea of nation took off and became global. The period the book covers, and the celebration of the day, are bound at the hip, just like Ireland and America.