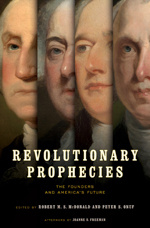 We are pleased to offer this essay for Inauguration Day by Robert M. S. McDonald and Peter S. Onuf, editors of the new book Revolutionary Prophecies: The Founders and America’s Future. Enjoy!

Do these seem like extraordinary, unprecedented times?  Did the 2020 election and its seemingly endless aftermath expose and exacerbate deepening divisions among Americans that threaten our very existence as a people?  Historians can’t answer these questions.  They can only tell you that the future, like the past, is a “foreign country” and that we’ll get there somehow, despite ourselves.  After all, we remind ourselves, history does not repeat itself: it is always extraordinary, always unprecedented.  In dark moments we stumble forward, lost in a fog of complexity and contingency, gripped by fear and buoyed by hope.  With the gift of hindsight, historians can tell you how past generations—as confused and embattled as ours—envisioned their own radically uncertain and indeterminate futures.  No generation was more confused and conflicted than the Revolutionary generation, the first “Americans” who imagined that they could make themselves a free and independent people capable of governing themselves and determining their own destiny.  Enlightened patriots knew that their bold “experiment” could fail; they recognized that the union they constituted, made “more perfect” and stretched to its tenuous limits, could all too easily fall apart.  They did not speak with a single voice, nor were their various original intentions fulfilled.  Yet the idea, aspiration, or inspiring fiction of nationhood endures, animated by the hopes, fears, and conflicts of successive generations, always destined to be an experiment—unless and until it finally fails.

Revolutionary Prophecies surveys the wide array of hopes and fears that united and divided Americans in the first decades of our national history.  Distinguished contributors to this collection focus on familiar figures—from Benjamin Franklin to George Washington, John Adams, Alexander Hamilton, James Madison, and James Monroe—as well as on less familiar individuals and groups within and beyond the patriot coalition.  In the crucible of the Revolution, sectional conflict, and foreign wars that threatened to engulf and destroy the new nation, prominent statesmen negotiated tenuous compromises over questions of conflicting interest and principle in order to sustain the “common cause.”  Their most conspicuous disagreements centered on how they defined the “people” and on how the ordinary citizens who were mobilized to fight and pay for the war would participate in their own government.  Anxious Anglo-American elites feared mob rule, the lawless reign of demagogues and democrats; indebted and overtaxed farmers in Massachusetts, Pennsylvania, and across the continent feared losing their farms and freedoms to a rising class of home-grown aristocrats.  Drafters of new state constitutions sought to channel and mitigate conflict by establishing broadly acceptable rules of the game, building trust and civic capital so a plurality of interests could flourish.  These more or less successful, often controversial “peace plans” for the states provided the template for a continental peace compact for an even more problematic and controversial federal union—the union that would eventually collapse in the Civil War.  Drafted in wartime, the first American constitutions also marked out sharp, racially inflected boundaries between the people and potential enemies at home (“legally” enslaved people in every original state) and abroad (including Indian nations with which American diplomats negotiated treaties).

When Americans ratified the federal Constitution, exultant commentators proclaimed it a “miracle,” attributing its surprising success to a benign providence—and so acknowledging fundamental, seemingly intractable differences among themselves and with the “powers of the earth” that threatened anarchy, disunion, and counter-revolution.  Prophecies of peace, prosperity, and a new republican order for the ages reflected the desperation of a people—or peoples—in the wake of a protracted era of unsettlement, insecurity, and regime change dating back to the onset of the Anglo-American imperial crisis of the 1760s.  This was no golden age of patriotic unity, and it should not surprise us now that Revolutionary prophecies struck such a broad range of often discordant, conflicting notes.  In listening to their testimony, however, we can ask ourselves how our circumstances and the challenges we face compare with theirs.

Revolutionary Americans—as much and perhaps even more than Americans today—had no idea of what was coming next.  In our darkest moments we bemoan deepening division, a coming apart or fracturing of what was once whole, united, exceptional, and great.  Our Revolutionary forbears saw things differently.  Their desperation reflected profound anxieties about whether would-be Americans would ever come together sufficiently to secure the legacy of liberty they hoped to leave for future generations.  Were the people vigilant enough and their representatives virtuous enough to make the republican experiment succeed and so sustain the liberties they cherished?  Distrusting themselves—whether as Christian sinners or as faithful adherents of the rule of law—they had ample reason to distrust their countrymen, and much more reason to distrust the peoples of distant, nearly foreign states (or countries) in the Revolutionary federal alliance.  Their leap of faith was toward “a more perfect union” of their newly constituted state-republics.  They declared, imagined, and aspired to a new collective, national identity, but they did so as “realists,” wary of potential assaults on their rights—including their “right” to own human property.

We rightly congratulate ourselves on having achieved—or at least aspiring to achieve—a more capacious and inclusive conception of our national community.  And the authors of the New York Times’ 1619 project are certainly right to emphasize the critical and continuing importance of racial slavery and its legacies for our national narrative.  But 1776 still matters, and now more than ever. What we have (or should have) in common with the original revolutionaries—and with individuals and groups equally animated by the “spirit of 1776” in their ongoing quest for equality and inclusion—is a recognition of the transcendent value of a constitution and civic community that enables us to aspire to an ever more perfect union.

This is not our prophecy and we don’t pretend to speak for anyone else, and particularly not for our excellent authors.  We certainly don’t know what’s coming next.  But we take the liberty of expressing our hopes for the future, as we have sought to discern those of a diverse and divided Revolutionary generation.  Call it a prayer.