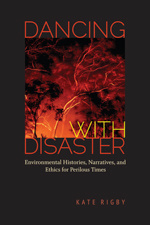 As the noted possum-philosopher Pogo bleakly commented from a trash-strewn Okefenokee Swamp on a 1970 poster announcing the first Earth Day, “We have met the enemy, and he is us.”

Fifty years on, evidence of the damage we humans have wrought upon the environment is everywhere around us: in rising seas, disappearing species, increasingly powerful storms, and soaring temperatures. Tiny Tangier Island’s inevitably losing battle to stave off the waters of the Chesapeake offers one potent example; the 2019-20 Australian bushfires whose images horrified millions the world over illustrate another.

The Australian scholar Kate Rigby got the idea for her book *Dancing with Disaster *during another such conflagration in 2003. Standing with others on a hill in Canberra close to her childhood home, Rigby “witness[ed] the wall of smoke surging toward us, turning day to night, with burned and smoldering leaves showering down around us.”  She began to consider the idea of the “natural disaster” and found the term wanting: not only did it perpetuate the schism between nature and culture, but it allowed humans to continue to evade environmental responsibility.

In response, Rigby produced an unusual and fascinating work that artfully braids literary history, philosophy, and science with environmental narrative in a nuanced exploration of eco-catastrophes, including floods, earthquakes, fiery  conflagrations, cyclones, and (most apposite for the current moment) pestilence. Nowhere else, we can almost guarantee you, will you find Voltaire and Goethe sharing book space with the Army Corps of Engineers. Though highly theorized and punctuated by a variety of close readings, the book is yet immensely readable—and immensely resonant.

“Despite the proliferation of warnings,” the author writes, “some spoken by scientists, others legible in the earth itself, the prevailing social system, governed in large part by the interests of a turbo-charged variant of global capitalism, remains set on the path of squandering. While continuing to dig up the dead, exhuming and consuming the remains of ancient forests and sea creatures to power our industries and light our cities, this system is now promoting new techniques of assaulting the earth through such desperate measures as the exploitation of coal-seam gas and tar sands…. And, even as the weather gets wilder, maladaptive modes of development, underpinned by the mantra of economic growth and the delusion of mastery, are escalating all manner of risks and amplifying social vulnerability to the only partially predictable, and potentially catastrophic, impacts of climate change.”

We recommend Dancing with Disaster to your attention.