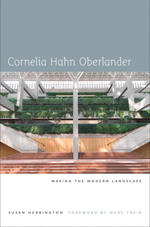 When Cornelia Hahn Oberlander passed away on May 22, 2021, we lost an amazing landscape architect and my good friend. I wrote Cornelia Hahn Oberlander: Making the Modern Landscape, which was published by the University of Virginia Press in 2013. I remember telling Boyd Zenner, the architecture and landscape acquisition editor for the press at the time, about the book in 2008. She immediately saw the potential and encouraged me to write a prospectus, which was thankfully accepted. The book was a real highlight for Cornelia, and it helped spread the word about her extraordinary life and her groundbreaking work.

At first I think Cornelia thought she was going to dictate the narrative to me, but I explained to her that I was going to interpret her life and work for the book, and that I hoped she would enjoy it. Thankfully, she did, and she was very generous with her time and her knowledge. With support from the Social Science and Humanities Research Council of Canada, The Canada Council for the Arts, and the Graham Foundation, I was able to hire students and photographers, and visited fourteen different archives across North America. I conducted formal interviews with Cornelia and had many informal conversations with her as well, and we visited many of her landscapes together. If she forgot a detail, she would say, “Susan, consult The Google.”

Cornelia also shared with me numerous personal stories, documents, and photos. Her most poignant accounts involved her fleeing from Nazi Germany with her mother and sister. Then there was the problem at that less-enlightened moment—that Cornelia wanted to become a modern landscape architect­—and she was a woman. While she had numerous run-ins with her professors as a student at Harvard, as well as her bosses at Skidmore, Owings & Merrill, she also had some funny stories. When she worked for Mayer & Whittlesey in New York, she was asked to go to the drafting store and pick up some “vanishing points.”

When the book was finished I was able to secure funding from the Canada Council for the Arts for a book tour. We covered twelve different cities (eleven in North America, one in Sweden) between 2014 and 2015. Because Cornelia accompanied me, I didn’t do the typical book reading. Instead I showed slides to Cornelia in front of a live audience and she spoke to the images. The presentation was different for each event, we never rehearsed, and I had absolutely no idea what she was going to say! It could be a hilarious anecdote, practical advice, or a heartfelt reminiscence of her life with Peter Oberlander (1922–2008).

When we were touring around the various cities, she had oodles of friends and admirers at every stop. There were often dinners and parties associated with the book talks. She liked to introduce me to people as “my author,” which at the time I thought was a strange way to introduce someone. But now it’s something I fondly remember. I could not have picked a better person to write about than Cornelia Hahn Oberlander, or a better friend for these road trips, enlivened by her views of her life and her wonderful work.

Photo caption: Cornelia Hahn Oberlander, with the published account of her life and work, 2014